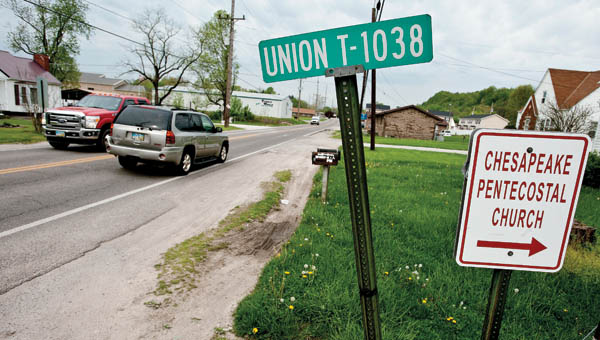 Traffic passes back and forth along Old U.S. 52 outside of Chesapeake Wednesday morning. The Village of Chesapeake is looking to extend the village line to the Lawrence County Airpark.

CHESAPEAKE — As far as the Union Township Trustees see it annexing the 730 parcels that make up west Chesapeake into the Chesapeake village limits comes down to who can provide services better. And the trustees think that question has been answered for years: the township.

About two weeks ago, the Chesapeake Village Council voted unanimously to annex about two miles from its village limits west, an act all three township trustees said they were not notified about directly by village officials.

“No one has talked to us about it,” Union Township Trustee Rick Gue said. “That has been what has thrown us. We haven’t had any conversation with Mr. Gilpin about it.”

One advantage to the annexation Mayor Dick Gilpin has cited is the village’s ability to provide more security for the area including Chesapeake’s three schools, recently the site of an extensive copper theft.

“We would take in all schools and that way we can provide some kind of security,” he said. “We can do drive-throughs at night.”

But so can the trustees, they say.

“They don’t have the funds as far as police protection,” trustee Mike Curry said. “We have constables. We can have people down there to patrol.”

But police protection is only one part of the annexation question, the three trustees say.

“Chesapeake has two fire levies and it is a higher millage than the township,” Chris Kline, deputy auditor, said. “What the township is collecting now will go off the people’s taxes.”

Also, right now, the township takes care of the roads in that section of the county. If there is an annexation, property taxes now collected for that area will cease to go to any part of the township budget, including its road and bridges fund.

“The township would no longer be responsible for those roads and won’t be able to collect those taxes,” Kline said.

Recently the township spent $30,000 paving a subdivision in the potential annexation area.

“We pave the streets and do whatever needs to be done,” Curry said.

If the annexation goes through for the approximately 500 residents in the west end, overall property taxes will increase by $34,410. That translates into a boost to the village’s general fund of $22,462 and $25,346 more for its fire levy. The reason the general fund and fire levy figures do not total the increased taxes for property owners is because the state pays 10 percent of the taxes on all residential parcels and an additional 2 and a half percent if the property is the taxpayers’ principal residence.

For the annexation to happen the village has to get petitions signed by the majority of property owners affected and provide those and a map of the desired area to the Lawrence County Commissioners. The map and the signatures must be verified as to accuracy.

“Then the commissioners will accept it and set a public hearing,” Kline said.

After the public hearing the commissioners will then make their decision.

“(The trustees) can come in and make their case against it, but ultimately it is the decision of the commissioners,” Kline said.

Right now the commissioners aren’t saying what they will do. Both Les Boggs and Freddie Hayes want to study the issue before making a decision.

Commission President Bill Pratt wants to see if the requisite number of signatures can be obtained.

“I don’t want to influence what they decide,” Pratt said. “I have asked the Chesapeake Village Council I would rather they annex all the airport or none. I don’t want to see it split in half. That would hinder our ability to develop it the way they want.”

Besides the residences and already existing businesses in the potential annex area, the village also wants to take in part of the Lawrence County Airport, a site that some want to see turned into a commercial development.

If that were to happen, part of the taxes from those businesses would go to Chesapeake.

“That airport should have nothing to do with it,” Porter said. “It doesn’t have to be in the village. That tax base would be way down the road. People would really suffer with fire and road maintenance.”

Ex-lawmaker John Carey to head Board of Regents