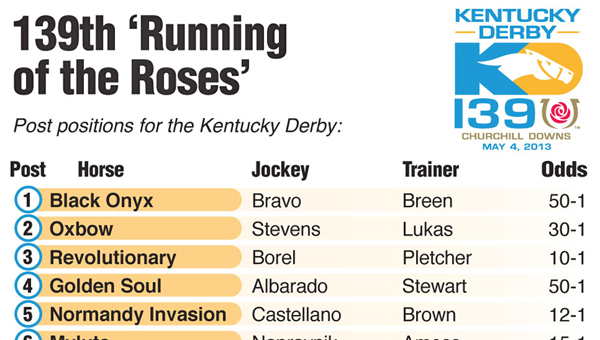 LOUISVILLE, Ky. (AP) — It’s easy to figure out where Todd Pletcher got the idea to enter five horses in this year’s Kentucky Derby. He used to work for D. Wayne Lukas.

For the longest time, Lukas was the biggest star in the sport, the guy in the white hat with an army of thoroughbreds stashed coast-to-coast, winning every big race in sight.

In 1996, Lukas won his third Derby with Grindstone, a horse he considered the weakest of his five entries. It took him decades to admit as much, but he can do that now. At 77, Lukas has 13 Triple Crown wins, including four at the Derby, and is the sport’s elder statesman. He’s already in the Hall of Fame.

Pletcher tried overwhelming the Derby the same way. He daringly took aim with four horses his first time, in 2000, and then tried a record-tying five in 2007. It wasn’t until he saddled four in 2010 that long shot Super Saver delivered his first whiff of red roses in the winner’s circle.

Lukas had long ago advised him, “You can win all these stakes, but you got to get this one on your resume.”

Other than another Derby win or two — he’s been to a dozen with only the one win — Pletcher’s resume couldn’t get much better. He’s won Breeders’ Cup races, led the nation in money winnings, and commands the best and biggest racing operation in the country.

Indeed, he learned well from the master.

These days, though, they’re a marked contrast of each other — one is loose and takes all questions; the other is a little uptight.

With a fancy cowboy boot propped on a white sawhorse, Lukas holds court until the last visitor is satisfied.

“Can you believe we get paid for this?” he marvels.

Pletcher can barely stand being quizzed. He’s as buttoned-down as Lukas is casual.

The 45-year-old son of a trainer, Pletcher comes to work in a perfectly pressed white shirt tucked into belted jeans, and his gray hair is cut short. Neatness is something he learned from Lukas’ spit-shined example during seven years as an apprentice.

Not surprising, Lukas and Pletcher hold down the top two spots among trainers for the most Derby starters. Lukas is extending his record with Nos. 46 and 47 this year; while Pletcher’s current five give him 36.

“Now,” Lukas said, showing some of the candor that comes with well-worn success, “35 of those I didn’t want to run.”

Pletcher might have had seven horses in the starting gate at Churchill Downs if not for health issues with Breeders’ Cup Juvenile winner Shanghai Bobby and Violence. “He knows what to do,” Lukas said. “It’s such a difficult race to win.”

Lukas’ legacy was cemented long ago. If he adds a fifth Derby on Saturday, he could become the oldest winning trainer in race history. He’s throwing two long shots into the 20-horse mix: Oxbow and Will Take Charge.

Lukas, a former Wisconsin high school basketball coach, clearly knows he’s closer to the end of an enviable run. “I’m only going to do this until I’m 95,” he said with a laugh.

Pletcher, meanwhile, still has to be coaxed out of the small office near his horses’ stalls that offers a clear sightline to Lukas’ perch. With a TV camera in his face, Pletcher is pleasant but bland, parting with innocuous nuggets about each of his horses.

He’s equally middle-of-the-road when pressed on who he would like to see win if it can’t be him: “I root for everybody.”

On a couple of points, though, Lukas and Pletcher are alike.

Regarding the competition, Lukas likes to quote Charlie Whittingham, the oldest Derby-winning trainer: “Never say anything bad about a horse until he’s been dead 10 years.”

Pletcher likes to control every last detail around his neat-as-a-pin barn, another habit he picked up from Lukas. The gravel is always carefully raked and blooming flowers spill out of hanging baskets.

Pletcher lives in a perpetual state of unease about his horses’ welfare, whether it’s before the Derby or a low-priced claiming race at a smaller track.

“That’s part of life as a trainer,” he said. “I put the same amount of pressure every year on myself.”

Pletcher is answering to five different owners at the Derby. They range from 85-year-old Cot Campbell, a refined son of the South, to 44-year-old Mike Repole, a brash entrepreneur from Queens, to Kentucky native Ken Ramsay who comes down with a yearly case of Derby fever.

Repole respects Pletcher for running his stable like a corporate CEO.

“There’s a lot of great NBA players, but there’s only one LeBron James. Todd is the best at what he does,” Repole said. “He’s pretty honest with everybody. Everyone respects how hard he works.”

Of the trainer’s five jockeys in the race, four are Hall of Famers with six Derby wins among them.

“I’m not a guy that handcuffs a guy with a lot of instructions,” Pletcher said. “I tell them a few key points and they have to make decisions out there.”

Lukas plays it even looser with his riders.

“I always tell them at the end, ‘Hell, just do what you want,”’ he said, laughing.