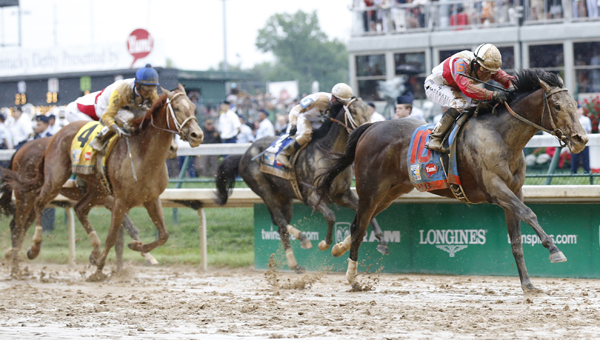 Orb, with Joel Rosario up, captures the 139th running of the Kentucky Derby at Churchill Downs in Louisville, Kentucky, on Saturday. (The Ironton Tribune / MCT Direct Photos)

LOUISVILLE, Ky. (AP) — Orb was so far behind a wall of horses at the Kentucky Derby that even his jockey wasn’t sure he could master the muddy track and make a run for the roses.

“I was really far back,” Joel Rosario said. “I said hopefully he can go faster than that. I was saying maybe I was too far back, but it was so easy.”

The bay colt made it look that way Saturday, splashing through the slop to win the Derby by 2 1-2 lengths and giving Hall of Fame trainer Shug McGaughey his first victory in the 3-year-old classic.

Orb, the 5-1 favorite, broke from the No. 16 post and bided his time near the back of the pack early while Palace Malice set a blistering pace in the muck.

Orb was still idling in 16th place a half-mile into the race. On the turn for home, Rosario moved him past 11 horses into striking position in the middle of the track. With a quarter of a mile to go, Orb began picking off the leaders. The only question left was whether he could sustain his momentum on a surface that resembled creamy peanut butter.

“He was very relaxed, it’s exactly what I wanted,” Rosario said.

When the field turned for home on the cool, overcast afternoon at Churchill Downs, Normandy Invasion had the lead. But Orb was gearing up and prevailed in the deep stretch, carrying Rosario to his first Derby win.

“Perfect trip. I stayed on the outside I don’t want to be too wide on the first turn. I was hoping somebody in the middle (of the race) didn’t push me wide,” he said.

The 62-year-old McGaughey said the victory meant everything to him.

Goldencents, owned in part by Rick Pitino, coach of Louisville’s national basketball champions, finished a 17th. His jockey, Kevin Krigger, was trying to become the first black rider to win the race since 1902.

Rosie Napravnik was also bidding to make history as the first woman jockey to win the world’s biggest horse race. She finished fifth aboard Mylute, the highest finish by a female rider.

D. Wayne Lukas, who won the Derby four times and would have been the oldest trainer to saddle a winner, sent out two runners. Oxbow, with three-time Derby winning jockey Gary Stevens aboard, finished sixth. Will Take Charge was eighth.

The rain that pelted the track earlier in the day had stopped by the time 19 horses paraded to the post for the 139th Derby.

The crowd of 151,616 must have known something, with a surge of late money sending Orb off as the favorite after Revolutionary owned that position most of the day.

Winning co-owners Stuart Janney and Ogden Mills “Dinny” Phipps scored their first Derby victory. The first cousins are among the sport’s blue bloods that include the old-money Whitney and Vanderbilt families.

Being from Lexington, the heart of Kentucky’s horse country, McGaughey figured to be a regular Derby participant. But Orb was just his second starter since 1989, when McGaughey watched Easy Goer lose to Sunday Silence.

Orb also was the second Derby starter for both Janney and Phipps, whose previous entries were in 1988 and ‘89. Their family wealth allows them to race the horses they breed, unlike the majority of current owners who are involved through partnerships that split up the exorbitant costs of the sport.

The cousins’ grandfather, Henry Phipps, founded wealth management firm Bessemer Trust in 1907. Janney serves as chairman, while Dinny Phipps is its director. He also chairs The Jockey Club, the sport’s governing body that registers thoroughbreds, while Janney is vice chairman.