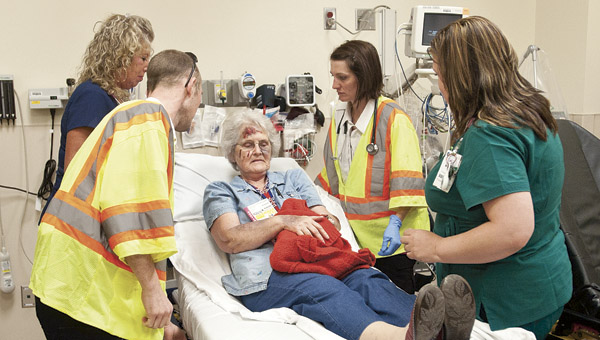 The streets of Coal Grove and Ironton were filled with sirens and lights Saturday morning as law enforcement, firefighters and emergency medical services personnel worked together to respond to a mock hazardous material spill.

The scenario was a van with multiple passengers struck a truck carrying hazardous material on Marion Pike at the U.S. 52 intersection. Vapor begins escaping from the truck following the incident and someone approaching the scene stops and calls 9-1-1.

Chief Ed Webb, with the Chesapeake-Union Township Volunteer Fire Department, said the exercise is important because it helps the different players learn how the others work and increase communication between them.

“We go into a full-scale disaster scenario to check our responders, our equipment and to check and see where we need to fine-tune our communications in case of a real world disaster,” Webb said. “That last part is really important because communication between agencies is vital in making a scene safe.”

All counties in Ohio are required to have a full-scale exercise every four years, Dan Pfeiffer, assistant exercise controller, said. Exercise participants are graded on a number of things, including initial notification of response agencies, communications and hospital services, Pfeiffer said.

After the victims were picked up on the scene they were transported to St. Mary’s Medical Center Ironton Campus. When they arrived, they were either taken to a triage room for stabilization or made to go through a decontamination room if they were exposed to the chemicals on scene.

Kelsey Hackworth, LPN student at Collins Career Center and volunteer victim, said she enjoyed playing a role in the exercise.

“I didn’t prepare or anything, I just came in and played,” Hackworth said. “It was fun and I got to ride in an ambulance for the first time. I think the medical teams all did a good job.”

This is the first exercise at the St. Mary’s facility in Ironton and it was interesting to see how everything worked out, Andy Watson, emergency management coordinator, said. She said they conduct regular drills and classroom training, but full-scale exercises like this one bring it all together.

“I think it went really well,” Watson said. “We learned some things because this was our first time doing this here and we needed to see how the flow of patients went. We needed to make sure our command center was in working order and our communications were good with the main campus in Huntington.”

Watson said she felt the exercise was a success, but said it taught them there needs to be better communication between the scene and the medical facility. She said some things got lost in traffic and if the scenario was real they would have spent as much time as possible to prepare for incoming patients.

After the exercise was completed all participants returned to Dawson-Bryant High School for lunch and debriefing.

Recently, the Area Agency on Aging District 7, Inc. (AAA7) has been made aware of individuals in the area... read more