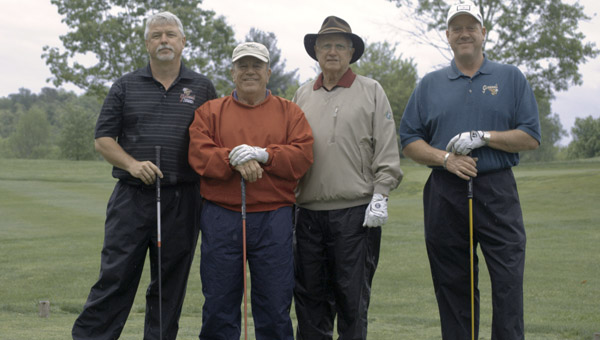 The off and on rain did not seem to deter the golfers from enjoying themselves as smiles and laughs accompanied each swing.

Tom Lemaster, president of Giovanni’s Pizza Inc., said this was his third year involved in the tournament and he enjoys being a sponsor and participant.

“I’m out here to support Ohio University, my alma mater,” Lemaster said. “It’s always important to help out the school. It’s a great chance to come out and play at this club and have fun with some friends.”

And the Giovanni’s team was stacked with old friends. Lemaster was joined by Dave Grant, his right hand man at Giovanni’s and long-time business associates, Dave Wortman and Robin Reed.

A new addition to the tournament this year, one which added some excitement to help balance out the gray skies, was a million dollar shot, Don Moore, associate professor of electronic media, said. Mitch Hignite took the 165-yard shot but came up a little short.

Proceeds of the 2013 event benefit the OUS’s electronic media program. The program is moving to upgrade its facilities to continue providing high-quality equipment and software to its students.

“We are in a campaign right now to move everything to high-definition,” Moore said. “We are using the golf tournament as a kick-off to that.”

Moore said he expects the tournament’s proceeds to provide a good start for the campaign.

Stephanie Burcham, director of the OUS Proctorville Center who has been a part of the tournament since its inception, said she looks forward to the event every year.

“Bernard Edwards was a great supporter of Ohio University,” Burcham said. “In his later years he became a liaison for OU and understood the benefit the university had for the people in this community. One of the things I held dearest to is that Bernard was on a golf course with Marshall Smith and convinced him there to donate the $1.2 million for of property for the Proctorville Center.”

Burcham said Edwards proved great things can happen on a golf course, so after he passed it was decided a golf tournament in his name would be a great way to honor his memory and help raise money for Ohio University Southern.

Closest to the pin: Nathan Speed

BURLINGTON — The $3 million price tag to bring running water to fewer than 30 households on top of Macedonia... read more