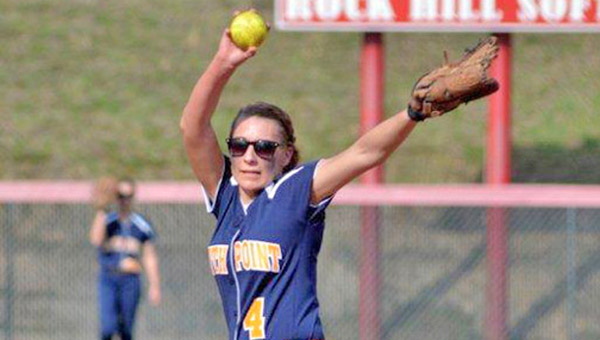 The Lady Pointers’ bats sounded like a fireworks display as they had 18 hits and crushed the River Valley Lady Raiders 17-0 in five innings on Thursday to clinch a share of the Ohio Valley Conference title.

“We had a tremendous effort out of our girls after a long layoff because of the rain. Kaitlyn Brown pitched another outstanding game and found her grove in the batter’s box. Just about everyone had good, solid hits tonight.”

Brown pitched a one-hitter and struck out nine in five innings of work. She was 3-4 with four RBIs at the plate.

Sylvia Griffith had a huge game offensively. She was 2-3 with a double and a home run and five runs batted in.

The Lady Pointers got all the runs they need with three in the first inning.

Brown doubled and Winkler singled to make it 4-0 in the second.

South Point erupted for eight runs in the fourth inning and it was 12-0.

Andi Kleinman and Hannah Carey singled and Brown doubled home a run. Winkler capped the rally with a double.

In a five-run fifth, Rawlins singled, Kleinman reached on an error and Jessika Majher had an RBI single. Shelby Chinn singled in a run and Brown completed the scoring with a three-run home run.

“I’m very pleased with our bats, fielding and pitching. We hope to continue this next week when we play for the outright league title and begin our tournament run,” said Heaberlin.

Ashley Cheesebrew had the only hit for River Valley.

Jim Walker jim.walker@irontontribune.com   St. Joseph Flyers’ coach Brent Wirzfeld learned whom he could turn to in a pinch. With... read more