ACTC students graduate at the Paramount 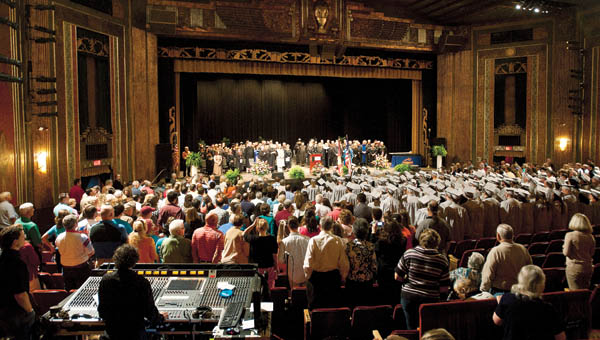 Graduates of Ashland Community & Technical College make their way into the Paramount Arts Center for the 2013 commencement Saturday.

ASHLAND Ky. — Paul Baker and Brian Nolan made an unlikely pair as they stood outside the Paramount Arts Center Saturday morning waiting to go inside to walk across the stage during the Ashland Community & Technical College graduation ceremony.

Baker did not look a day older than his 19 years, while Nolan had a gray-speckled beard under his graduation cap. Their paths may have been different, but they both said they are happy to receive their associates degree and take their next steps.

“It feels really good,” Baker said. “I worked really hard for it, so it’s good to see it finally happen.”

“I was out of school for 20 years after high school,” Nolan said. “I had a few health issues in my previous job and couldn’t work manual labor jobs anymore and thought, ‘well, I’ll have to use my mind from now on. My back is not going to do it for me anymore.’”

Graduating with his associates degree in math and science education, Nolan said he plans to attend Ohio University Southern to get his bachelor’s degree and become a teacher. He said he plans to eventually get his masters and teach at the university level.

Baker also has big plans after ACTC. He said he plans to attend the University of Kentucky to receive his bachelors in biology and masters and Ph.D. in physical therapy. He, along with Nolan, credited ACTC for helping them get focused on their education to make their dreams a reality.

“I didn’t do that great in high school,” Baker said. “I had a 2.9 GPA then. I have a 3.9 now. I needed to come here and get more focused before moving on and pursuing my main goal.”

Nolan said he was not the model student in high school either, but coming back to school as an older student helped him focus on getting what he wanted. He said ACTC also helped him by making his education affordable and the small classes made for a good learning environment.

“ACTC has a lot of really good professors,” Nolan said. “People think they have to go off and spend a lot of money for the first two years, but you really don’t.”

While they took different paths to their associate’s degrees, Baker and Nolan said they are happy to walk across the stage together and show everyone ACTC can help students reach their goals.

And they were not alone Saturday. A record number 568 students were recognized at the ceremony.

Hotel project slated for this year

An artist’s rendering of what the Ninth Street development project could look like. Many of the details are still being... read more