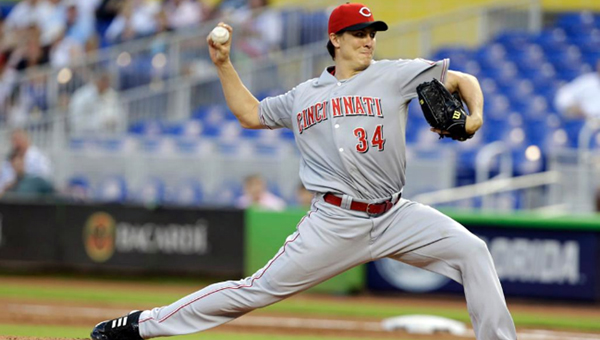 Cincinnati pitcher Homer Bailey threw a complete game six-hitter as the Reds beat the Miami Marlins 6-2 on Tuesday. Bailey racked up 10 strikeouts and did not walk a batter. (Photo Courtesy of The Cincinnati Reds)

MIAMI (AP) — One pitch from being pulled, and one strike from victory, Homer Bailey unleashed a 97 mph fastball to finish off the Marlins.

With his 125th pitch — a career high — Bailey completed a six-hitter and helped the Cincinnati Reds extend their winning streak to four games by beating Miami 6-2 Tuesday night.

Bailey went to a full count on the final batter, Greg Dobbs, and wouldn’t have faced another, manager Dusty Baker said.

“We were counting pitches in the ninth inning,” Baker said. “We were like, ‘Come on, Homer. Quit fouling them off, Dobbs.”’

Dobbs finally lined out weakly, and Bailey earned his first victory since April 5. The Reds climbed a season-best seven games above .500 as they began a nine-game trip.

The Marlins, who have the NL’s worst record, lost their third game in a row and fell to 5-12 at home.

Bailey (2-3) tied a career high with 10 strikeouts and walked none in his fourth complete game. He was glad to give the Reds’ relievers a break.

“They’ve been griping at me,” he said. “The last couple of games I only went five or six. It’s about time I gave them a day off.”

The right-hander has endured spotty run support this season, but the Reds scored five times in the second inning to go ahead 6-1.

“With that kind of lead I was just trying to be really aggressive,” Bailey said.

He retired his final eight batters and allowed only four hits over the final 8 2-3 innings.

“He worked with tremendous control,” Miami’s Adeiny Hechavarria said. “He located the pitches where he wanted and fooled us several times.”

A brief, uncharacteristic bout of wildness proved costly for Ricky Nolasco (2-5), who gave up six runs in five innings. He hit a batter with a pitch and walked two — both with the bases loaded.

Xavier Paul hit a three-run double for the Reds. Brandon Phillips, who began the night tied for the NL lead in RBIs, drove in two runs.

Miami batted rookies Derek Dietrich and Marcell Ozuna third and fourth, but the strategy failed to jump-start an offense ranked last in the majors in runs, batting average and homers.

“It kind of stems from our offense, with him going out there he knows he can’t give up much,” Redmond said. “He’s trying to be perfect; he ends up walking a couple of guys.”

Cincinnati broke the game open in the second inning, when they scored five times with two outs. Nolasco hit Shin-Soo Choo with a pitch and, after the Reds loaded the bases, walked Votto and Phillips to force in runs.

Nolasco then grooved a 3-1 pitch to Paul, who hit a three-run double.

“One out away — frustrating,” Nolasco said. “I’ve been doing a good job of staying away from that big crooked inning all year but it got me today.”

A five-run lead was plenty for Bailey.

“Homer to me has turned into one of those guys where you could maybe consider him the ace of your staff,” Votto said. “He has consistently gotten better over his career, and it’s really impressive to see him improve and grow.”

NOTES: With a temperature of 77 degrees at game time, the retractable roof was open for the ninth time this season. It was open only eight times last year. … Reds OF Chris Heisey, who is on the disabled list, aggravated a strained right hamstring Monday playing for Double-A Pensacola. His projected date to rejoin the team was pushed back to next week. … Cincinnati LHP Manny Parra, on the DL with a strained left pectoral muscle, began a rehab assignment Monday with Pensacola and threw one scoreless inning. … The Reds flipped RHP Mat Latos and LHP Tony Cingrani in the rotation to give the latter extra rest as he deals with shoulder soreness. Latos will now start the series finale Thursday, and Cingrani will pitch Friday in Philadelphia. … Reds RF Jay Bruce, who had played in every game, was given the night off. … The Marlins began the homestand averaging 18,865 fans per game, which ranked ahead of three other teams: Oakland, Tampa Bay and Cleveland.

Jim Walker jim.walker@irontontribune.com   PEDRO — The Rock Hill Redwomen didn’t have many hits, but fortunately their pitcher gave up... read more