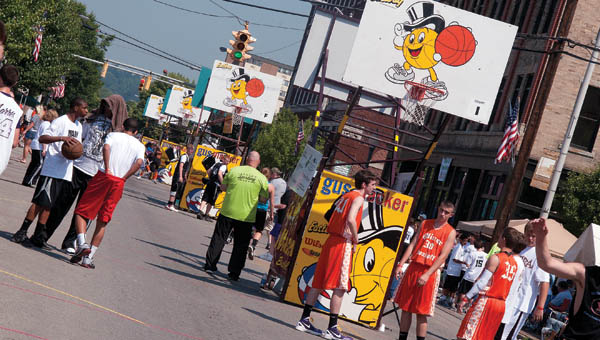 Scenes from the 2012 Gus Macker 3-on-3 Basketball event in downtown Ironton.

In just a few days, more than 200 basketball teams will flood the streets of downtown Ironton for the ninth annual Gus Macker 3-on-3 tournament.

The Ironton event, organized by the Friends of Ironton, kicks off the first of only four Macker tourneys in Ohio this year and will possibly feature some notable names, including No. 1 college prospect Andrew Wiggins, who is registered with a team and is slated to play Saturday morning. Official confirmation is pending. Wiggins announced Tuesday he will play for the University of Kansas this year.

If you’ve never been a Macker spectator, here is a play-by-play to navigate downtown on Saturday and Sunday.

Players will be able to register from 4:30 to 8 p.m. Friday at the city center on South Third and Vernon streets. Players can also register from 7 a.m. to noon on Saturday.

Opening ceremonies will be 8 a.m. Saturday with games starting at 8:30 a.m. through 6 p.m.

Beth Campbell, one of the event organizers, said the opening ceremony will recognize the Ironton High School basketball team’s seniors who took their season all the way to the state tournament final four.

The Ironton pep band and color guard will also help lead with the ceremony.

To find out where your favorite team will play and updated tournament information, the bracket/awards tent will be on the corner of Second and Vernon streets.

Courts will be located along Second Street, as well as behind the FOI Sprayground.

Center Court, the top men and women’s court, will be on the corner of Second and Vernon streets across from the Transit Center. Center Court will also host special events contests throughout the hours of 10 a.m. and 3 p.m. These include the 3-point shootout, hot shot contest and $250 slam dunk contest at 5 p.m.

The Dream Court will be located next to Center Court and beside the US Bank drive-thru. The court includes introductions with nicknames and a play-by-play call.

Tri-State Rehab will have a taping tent for the athletes on the corner of Vernon Street across from Center Court.

Concessions will be located in the Ironton Farmers Market space. The farmers market will temporarily move to a lot at Second and Center streets next to Central Hardware.

This is the first year for the “Hoops of Vendors” craft show in the Ro-Na Theater. Craft tables and vendors will be set up in the theater and there is no entrance fee.

Restrooms will be available in the Ro-Na, as well as the Transit Center.

On Sunday, there will be an invocation at 8 a.m. on Center Court will games starting back up at 8:30 a.m.

The Board of Developmental Disabilities games will be from 9 a.m. to 1 p.m. on the Dream Court.

The tournament will end at about 5 p.m.

Disposing of personal documents can be a challenge as the owners want to keep private information private. That’s why the... read more