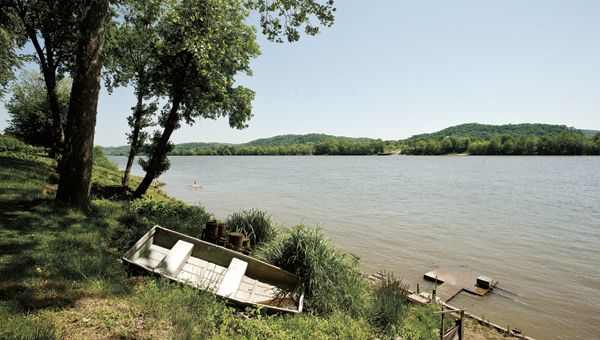 A view of the Ohio River from the eastern end of Lawrence County in Rome Township.

CHESAPEAKE — Turning the dream of a Chesapeake Bypass into pavement and striped lines appears closer than ever in the four-decades since the project was proposed.

That is the conclusion of Lawrence County officials who gave their pitch for the long-sought bypass at Tuesday’s Transportation Review Advisory Council (TRAC).

Between now through the summer, TRAC will hear presentations from officials from across the state wanting their share of state funding for projects.

Prioritizing those projects is the responsibility of the TRAC.

“I thought we had a good presentation and had a good response from board members of the TRAC,” County Auditor Jason Stephens said. Stephens was there as chairman of the KYOVA Metropolitan Planning Commission. “We’ve done the best we can and have our fingers crossed for this round of funding. We won’t know until August.”

The Ohio Department of Transportation, which will construct the bypass, is seeking $17 million for land acquisition for rights of way and $62 million for construction.

The bypass is part of a long-term project to link Huntington, W.Va., with Ohio by way of the Merritts Creek Connector on the West Virginia side near the Huntington Mall. That connector would extend over the Ohio River to the existing section of the Proctorville Bypass. The Chesapeake segment would hook on at the western end of Proctorville.

“(The Chesapeake Bypass would) connect our county first of all with Rome Township and with the business center in Burlington,” Stephens said. “From a financial standpoint that is important. It makes it easier for the people in Ohio. But it also opens up the Tri-State and sets the stage for better mobility. I think the whole outer belt project is the key to growing our area in the future.”

Also at the hearing in Pickerington was Lawrence County Commission President Bill Pratt.

“Just the body language of the people who were there was encouraging,” Pratt said. “We don’t want to sound too encouraged but they seemed to think that was the best meeting. We had the best chance we had in years for the funding.

Working in the bypass’s favor is a recent decision from the state to allow the Ohio Department of Transportation to borrow a billion dollars to fund infrastructure projects within 75 miles of the Ohio Turnpike.

“That is basically everything that is just north of Columbus to Lake Erie,” Lawrence County Engineer Doug Cade said. “Projects in that area applying for TRAC are eligible for turnpike money. It frees up TRAC money for the rest of the state. This is a critical time for the funding cycle of the TRAC.”

The TRAC is scheduled to come up with a draft list by the end of July and had a final decision on funding on Aug. 22.

A date has been set for the medical board hearing requested by the doctor at the former Pinnacle Wellness and... read more