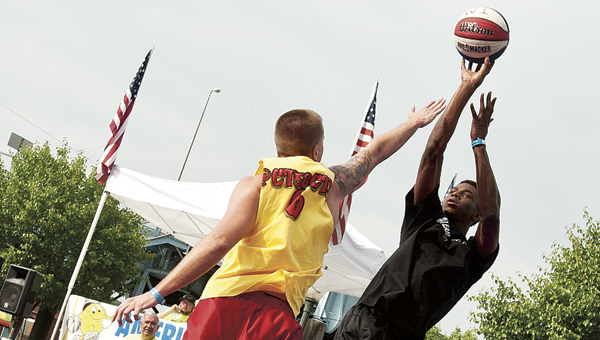 Andrew Wiggins, the top-rated high school player in the country, with Team Get Buckets attempts to score during a Top Men’s match against Sick Wit It at the Gus Macker 3-on-3 Basketball Tournament Saturday in downtown Ironton.

There he was, center court wearing his well-known No. 22 blazoned across his Lambert Law Office sponsored shirt. The guy the crowd wasn’t sure would show up on Saturday since his momentous decision on Tuesday.

But he did. By 8:30 Saturday morning Andrew Wiggins, the No. 1 high school basketball player in the country, was dunking baskets and guarding for teammates at this year’s Gus Macker 3-on-3 tournament.

As Ironton Mayor Rich Blankenship said about 10 minutes before Wiggins’ came onto the court, “If you see a bunch of people crowding around, you’ll know he’s here.”

But just as many were lined up and down South Second Street to watch their favorite players turn a four-block range into Mackerville.

Brad Early came from Cincinnati to cheer on his son Jackson, 12, as he played with his friends on their Lil Heat team. This was the second year for the Early family to get involved with the Macker tournaments.

Last year the Early clan came not only to Ironton, but picked up Macker games in Nelsonville, Chillicothe and Cambridge during the summer season.

“It’s great,” Early said. “When I was kid, we used to have a Gus Macker in Cincinnati and I would play. And it’s great for them. They get to travel and stay in a hotel.”

Another Macker veteran who showed up on Saturday was Kenzie Casto from Gallipolis, who, with her friends, was calling their team the Killer Barbies.

“There’s all the people and the excitement and to get to play with my friends,” she said.

This time last year Tyler Ward, playing with the ShockWaves, was burning up the street courts pulling third place by the end of the two-day event.

“I like it, playing basketball and hanging out with my friends,” he said.

A first-time visitor to Mackerville was Carl Robinson, whose place for the weekend was at Court F where he was scorer and referee.

“I’m here to help out the kids and the city of Ironton,” Robinson said. “This brings in dollars to the city and brings out the crowds. I wish we would have more things like this.”

ROME TOWNSHIP — Corey Johnson and Matt Bittner were doing some last-minute decorating as they taped a garland of flowers... read more