Chapman fails in save effort as Phillies rally by Reds, 3-2 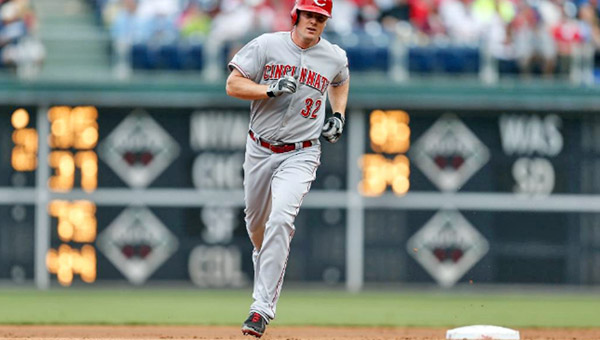 Cincinnati outfielder Jay Bruce rounds second base after hitting a solo home run in the second inning on Sunday. Bruce’s efforts weren’t enough as the Reds lost to the Phillies 3-2 in the ninth inning. (Photo Courtesy of The Cincinnati Reds)

Aroldis Chapman gave up consecutive homers to Freddy Galvis and Erik Kratz and the Philadelphia Phillies rallied for a 3-2 victory over Cincinnati on Sunday.

Chapman (3-2) blew his second straight save opportunity after converting his first eight chances this season. The 100 mph throwing left-hander walked pinch-hitter Delmon Young on four pitches to open the ninth.

Phillies pitcher Cliff Lee pinch-ran for Young and was caught trying to steal second base, but Chapman wouldn’t record another out. Kratz, who entered the game in the third inning after Carlos Ruiz left with a strained right hamstring, pulled a 3-2 pitch over the seats in left to tie it at 2-all.

Galvis followed by lining a 1-1 pitch just inside the foul pole in left.

“An unfortunate ending, stunning, but that’s the game,” Reds manager Dusty Baker said. “It kind of spoils you because you always expect (Chapman) to come through. We’ve got to get him out of the funk he’s in and hope it doesn’t last too long.”

Chapman got off to a rough start Sunday against Young and seemed upset with plate umpire Tim Welke while facing the Philadelphia pinch-hitter.

“I thought I threw good pitches to the first batter,” Chapman said through an interpreter.

And the lefty wasn’t disappointed with the location of Galvis’ homer, nor did he expect Sunday’s loss to linger.

“A fastball where I wanted it,” he said. “I don’t see any problems. Everybody gets hit. Why not me?”

The Reds appeared on their way to their ninth win in 10 games when Chapman entered.

Bruce led off the second with a towering shot to straightaway center to extend his hitting streak to 10 games. He is batting .390 with four homers and 12 RBIs during the spurt.

Joey Votto also stayed hot by going 2 for 4 for the Reds. Votto extended his hitting streak to eight games, and he is batting 17 for 33 over the stretch.

Bailey shut down the Phillies for the second time this season and left without a victory for the second time. He allowed five hits with three strikeouts and a walk. He also got a no-decision on April 16 in a 1-0 loss to the Phillies when he pitched eight scoreless innings while allowing two hits with a career high-tying 10 strikeouts and no walks.

It looked as if Bailey would earn the win this time before Chapman’s struggles.

“Bailey pitched a great game,” Baker said. “It was a real tough one to lose.”

The Phillies looked on their way to their seventh shutout of the season before the eighth inning.

Ben Revere, returning to the starting lineup after sitting out the past four, had three hits for the Phillies. Revere raised his average to .254.

Jonathan Pettibone gave up two runs — one earned — and seven hits in seven innings and has yet to allow more than three earned runs in six career starts.

The Reds added a run in the sixth on Todd Frazier’s RBI double. The run was unearned, though, as Votto advanced to second on Domonic Brown’s throwing error after leading off with a single.

Philadelphia got to 2-1 in the eighth on Utley’s single that scored Revere, but Brown flew out to right with runners on first and second against reliever Sean Marshall to end the threat.

But the Phillies made up for it in the ninth off Chapman.

“As soon as I hit it, it felt good,” Galvis, who never had hit a walkoff homer at any level, said. “Awesome. I think I’ll never forget it.”

“Today’s game was definitely a pick-me-up,” said manager Charlie Manuel, whose Phillies open a three-game set at Miami on Monday. “It will give us a nice, little ride to Florida.”

Ruiz left the game after straining his right hamstring running the bases in the second inning. He didn’t make the trip to Miami with the Phillies and will have an MRI on Monday.

Ruiz, who said he heard a “pop” while running, hopes to rejoin the team on Tuesday.

Howard will have an MRI on Monday.

“We’ll see,” Howard said following Sunday’s game. “It’s been acting up. I’ve been able to tough it out but told (Manuel) it was sore.”

NOTES: The Phillies have been shut out six times this season, which is the same total they were blanked in all of 2012. … The Phillies said right-hander Tyler Cloyd will be called up from Triple-A Lehigh Valley to pitch Tuesday’s game at Miami. The team needs a fifth starter with Roy Halladay sidelined after shoulder surgery and John Lannan (knee) on the DL. … Cincinnati right-hander Johnny Cueto (1-0, 2.60), on the DL since April 15 (strained right lat), is scheduled to face Mets righty Shaun Marcum (0-4, 6.75) when the teams open a series in New York on Monday. … Phillies lefty Cole Hamels (1-6, 4.61) will face Marlins righty Alex Sanabia (2-6, 5.00) Monday in Miami.

Errors are costly to Vikings

Jim Walker jim.walker@irontontribune.com   CHILLICOTHE — In a tight game, an error can often prove to be the difference. Imagine... read more