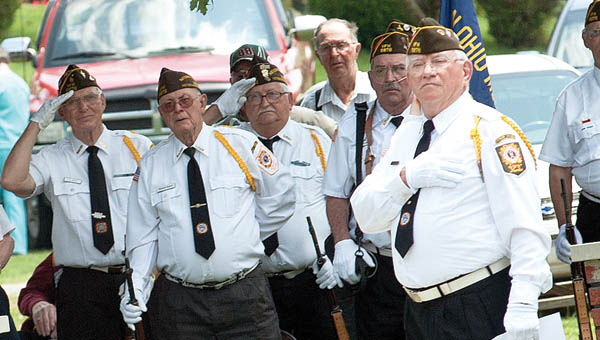 Members of the VFW 6878, of Proctorville, stand at attention during the Pledge of Allegiance during a special recognition of Armed Forces Day Saturday.

ROME TOWNSHIP — Corney Lett well remembers May 8, 1945. That was when he was liberated from German prison camp Stalag 17B after 17 months there.

Shot down twice during World War II, the second time ended with his becoming a prisoner of war.

That’s why Saturday’s Armed Forces Day service at the VFW Post 6878 had special meaning for the Proctorville veteran who will mark his 92nd birthday on Tuesday.

So much so that the World War II veteran was honored to be the one to place the wreath during the post’s celebration at its memorial near the VFW’s post home.

“This is a memorial for all the veterans of all the wars,” Dean Cooper of the VFW Post said.

Creating the memorial was a long-term dream of Cooper, a Korean War veteran.

A walkway leads to the bricks and mortar memorial where symbols of all soldiers rest ranging from a statue of a Union soldier to the helmet, boots and rifle forming a cross to memorialize a fallen soldier.

Cooper started work on his dream four years ago by calling in the services of Gary Tillis, art teacher at the Ohio University Proctorville Center, to create the design.

At one end of the memorial stand the flags of the United States, Ohio and MIAs, while down the walkway are 20 more flags — 15 American and five for the five branches of the service.

Even the dogs who supported the troops overseas but were left to die on the battlefields are honored with statues at the entrance of the memorial.

Last week the post added another symbol to the structure when it acquired a 105 mm Howitzer circa the Vietnam War era.

Cooper started the memorial to ensure those who gave their lives for the country would always be remembered.

“I spent 15 months underground in Korea,” Cooper said. “I know what it is like over there. You don’t know what war is like until you’ve been there. They give up their lives for us.”

The Tribune among top papers in state