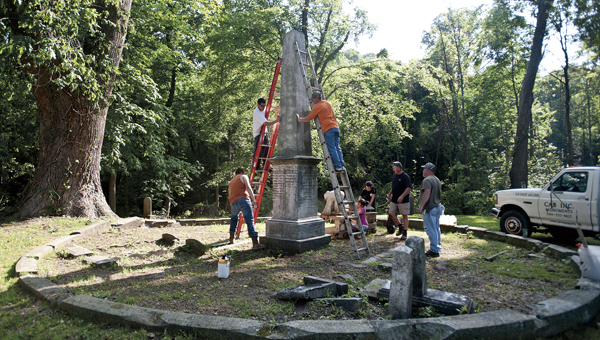 With a circle of burnt orange sandpaper no bigger than his hand Greg Klaiber scratched, scrapped, prodded and cajoled 162 years off the white marble obelisk that marks the final resting place of one of Ironton’s founders.

Squeezing the sandpaper into the crevices that spelled out the name of Mary Kelly, one of the children of William Dollarhide Kelly, Klaiber pulled out dirt and moss that had turned the Georgian stone the color of day-old coffee, camouflaging it into the bark of the ancient poplar nearby.

“You have to scrape all the excess mold off,” Klaiber, owner of Buckeye Monument, said. “If you don’t go through that process, you go to dusting it, that moss will act as a protectant and the sand will eat the stone away.”

For most of Wednesday, Klaiber teamed up with the community service workers of Ironton Municipal Court and its director, J.D. McDaniel, to give the Kelly obelisk a facelift, starting with a sandpaper scrub and ending with a sandblast bath.

“With some effort, we can get this done for Memorial Day,” McDaniel said.

For years the Kelly Cemetery, one of the first in Ironton founded in 1851, had been a not-too-cared-for backdrop for motorists rushing down to Portsmouth on U.S. 52.

But this winter McDaniel started a turnaround of the cemetery that he sees becoming another jewel in the historical record of the county.

By using the workers from Ironton Municipal Judge O. Clark Collins’ community service program, McDaniel has cleared away trees and unearthed gravestones lost in an avalanche of dirt and dead leaves. Just as importantly, McDaniel has mapped out a goal of turning the cemetery into a park where the harried can step back in time and gain moments of serenity.

“This could be as nice as Central Park,” McDaniel said.

As part of the restoration McDaniel is hoping those in the community with photographs of the cemetery will share them so he can create a more complete record.

“My bigger vision is to learn about the different bigger family names here, and put up signs with a little of their history,” McDaniel said. “The kids could come up here and get facts for their term papers.”

On Wednesday all efforts were funneled toward the Kelly obelisk, the first stone erected in the cemetery, originally to mark the death of three of the industrialist’s young sons in 1850, 1852 and 1854. Later the names of Mary, W.D. and his wife, Sarah, were chiseled into its face.

“You rub your hand over the marble and it is worse than a cat’s tongue,” said Klaiber, who was donating his time to the project. “It needs to be sanded back down. That way it will be preserved. That makes it all nice and slick.”

As Klaiber focused on the obelisk, community service workers sanded and brushed the 350-pound eagle that had once rested on top of the monument. No one knows when or how the massive stone was toppled from its 12-foot-high perch. But for decades it stayed propped against the base of obelisk, its face gone and a wing torn off.

But by 2 p.m. it was back where W.D. had wanted it, a sentinel for those finding their last rest in the tree-studded acreage.

“It was breathtaking when I saw it from the highway,” McDaniel. “I am very pleased.”

After three months on the job Greater Lawrence Chamber of Commerce director Jerry Rowe has resigned to go back into... read more