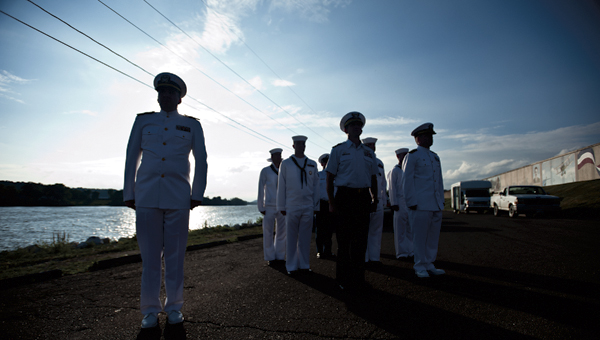 Members of the Navy Operational Support Center Eleanor in West Virginia stand at attention during the post of colors at the annual Navy Night Memorial Service event Thursday at the Center Street Boat Landing in Ironton.

A crisp wind off the Ohio River added a chill to the air as more than 60 people gathered to honor the men and women of the Navy and Coast Guard and those who made the ultimate sacrifice for their country.

Lt. Cmdr. Taylor George, legal officer with the 2nd Marine Expeditionary Force out of Camp Lejeune, N.C., was the event’s guest speaker. He said it makes sense for Lawrence County to start its Memorial Day observance with the Navy, because the Navy is where the U.S.’s protection starts.

“For someone to attack our shores they have to get here first,” George said. “We have sailors serving on the sea, on land and in the air ready to protect this nation. Our reservists, your neighbors, play a vital role in that mission.”

George had to pause for a few seconds as a train sped by blasting its horn, but as the engine passed he continued his speech by reminding the crowd of those in harm’s way right now. Every night, thousands stand the watch, he said.

Standing the watch was not a foreign concept for many in the crowd. When Judge Charles Cooper, Navy Night master of ceremonies, asked all veterans to stand or raise their hands, nearly a third of those gathered did so. Young and old, WWII veterans to those who served in Iraq and Afghanistan, all answered the call to defend their nation.

One of those who stood was WWII veteran Harley VanMeter. The big Navy crest on his blue ballcap was all anyone needed to see to know why he came out.

“I figure I was in the Navy so I ought to be here,” VanMeter said. “It’s Navy Night, of course I’d be here.”

The band’s performance of the Navy Hymm and the Rev. Andy Ramey giving the benediction followed the gunnery salute and placement of the memorial wreath into the river. Then the chilling tones of Taps wafted through the cool wind to end Navy Night.

Bridge to Ashland, Ky., may remain closed over the holiday

ASHLAND, Ky. — To say the traffic Thursday in Ironton was heavier than normal may be a bit of an... read more