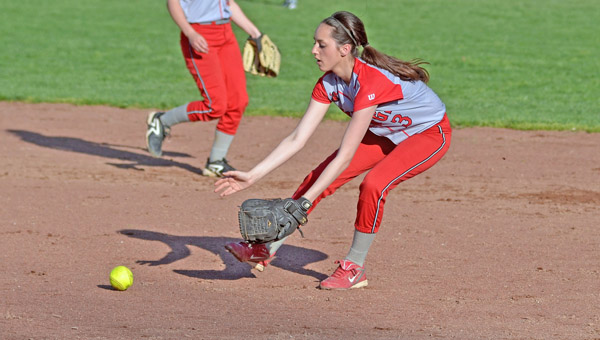 MINFORD — “Quit” is a four-letter word that the Symmes Valley Lady Vikings don’t like to say.

Down 5-4, the Lady Vikings scored three runs in the seventh inning and held on for a 7-6 win over the Whiteoak Lady Wildcats on Thursday in the Division IV district semifinals.

“This bunch is fighting hard. They showed a lot of character. There were a couple times it would have been easy to fold, but they chose not to fold and kept their composure,” said Lady Vikings’ coach Jeff “Odie” Estep.

“We just wanted to put the ball in play and keep the pressure on them. We got some hits and a lot of sacrifice bunts. Everyone contributed.”

Symmes Valley (13-14) will play Fairfield in the district finals at 1 p.m. on Saturday at Minford High School. Fairfield beat Eastern Meigs 8-1 in the other semifinal game.

“This group of kids can play. We have 14 losses but we could easily have 12 more wins. They just scrap and scrap and claw around,” said Estep.

Amber Bryant singled to start the Lady Vikings’ seventh inning. Stephanie Brown and Kaitlyn Payne both reached a fielder’s choice as a run scored to tie the game at 5-5.

Tiara Hatfield followed with an RBI single and a wild pitch scored Payne with what proved to be the winning run.

Whiteoak took a 1-0 lead in the first inning when Kiley Sosby doubled and scored on a throwing error.

The Lady Vikings took a 2-1 lead in the second inning.

The lead went to 4-1 in the third inning.

Brown singled, Payne tripled her home and Hatfield had an RBI single.

Whiteoak got within 4-3 in the fifth when Ashleigh Harless singled, Jayde Parr had an RBI doubled and Caitlyn Arledge followed with a run-scoring single.

The Lady Wildcats took a 5-4 lead in the bottom of the sixth when Mikayla Wescott was safe on an error, Parr doubled and a throwing error scored both runners.

Whiteoak got a two-out home run by Sosby in the bottom of the seventh and loaded the bases on two walks and a hit batsmen, but Payne got a ground out to second base to end the game.

Payne got the win in relief. Sosby — who struck out 16 and did not walk a batter — suffered the loss.

Hatfield was 4-4 to lead the Lady Vikings’ nine-hit attack. Sosby and Parr were 2-3 for Whiteoak.