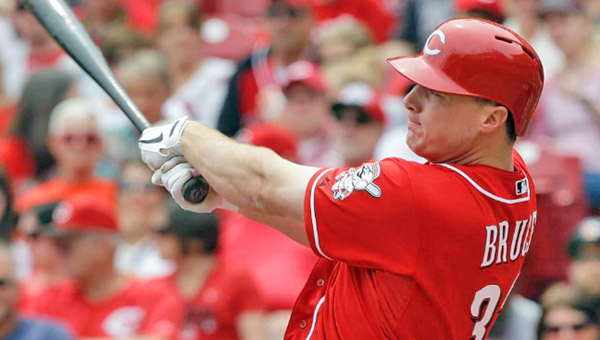 Cincinnati Reds’ outfielder Jay Bruce connects for his seventh home run of the season during Sunday’s game. The Reds built a 4-1 lead but the bullpen was unable to secure the victory as the Cubs won 5-4 in 10 innings. (Courtesy of the Cincinnati Reds.com)

CINCINNATI (AP) — Johnny Cueto turned a lead over the Cincinnati Reds’ bullpen, which turned the game over to the Chicago Cubs.

Alfonso Soriano hit a tying two-run homer in the eighth inning and Welington Castillo had a go-ahead double in the 10th, helping the Cubs rally from a four-run deficit in a 5-4 win over the Reds on Sunday that stopped Cincinnati’s five-game winning streak.

“We went as far as we could with Johnny,” Reds manager Dusty Baker said. “We had to turn it over to some other guys. They’ve got a job to do. That’s what they get paid to do. This is how they make their money. This one got away. We’ll start a new streak tomorrow. We’ve been playing good ball”.

Anthony Rizzo hit an RBI double against Logan Ondrusek in the eighth — his third double in two games — and Soriano followed with his fifth homer of the season and first since May 13, a 394-foot drive to left-center.

J.J. Hoover (0-4) walked Scott Hairston with two outs in the 10th, and Castillo followed with his double into the left-field corner.

Jonathan Broxton and Chapman were not available after pitching in two straight games.

Cincinnati, which had won 16 of 20, had not lost since May 19, when Chapman gave up back-to-back home runs in the ninth against Philadelphia.

Cueto gave up one run and four hits in seven innings.

Both dugouts were warned by plate umpire Bob Davidson, after Cueto threw over David DeJesus’ head in the sixth inning.

“I asked what it was about,” Cubs manager Dale Sveum said. “He said that batter was taking a long time to get in the box and that he knew Cueto wasn’t trying to hit him. I asked why he didn’t throw him out. He told me there was nothing he could do. I think it woke us up.”

“That just goes to show, don’t wake a sleeping dog,” Cubs starter Matt Garza said. “That’s immature on his part. … If he wants to say something to me, he knows where my locker is. If he’s got a problem, he can throw at me, and I’ll do the same. Hopefully, he grows … up. I hope he hears this. I really don’t care. I don’t know if there’s anything between him and (DeJesus), but I’ll stop it. I don’t think you intentionally try to injure somebody. I hope the league looks at it. I don’t want him suspended or anything. I hope his players talk to him and show him the way it is.”

Garza, making his second start of the season after coming off the disabled list, allowed four runs in the fourth.

“Garza didn’t have command of anything,” Sveum said. “When he did throw strikes there was foul ball, after foul ball. That got his pitch count up.”

Jay Bruce hit a solo homer, his seventh of the season and sixth in his last 22 games.

Ryan Hanigan hit a fly ball to deep straightaway center field with two on, and David DeJesus almost made a spectacular diving catch with his back to the plate. The runners held waiting to see what happened, and Hanigan wound up with a long RBI single.

NOTES: The Reds drew 41,321 and sold out a series for the first time since July 30-Aug. 1, 2010, against Atlanta. … The comeback win was Chicago’s seventh of the season and first on the road. The Cubs have lost 16 games in which they led…Brandon Phillips was 0-for-4,snapping his season-high 12-game hitting streak. … Joey Votto and Bruce have both been on-base in 15 straight games.