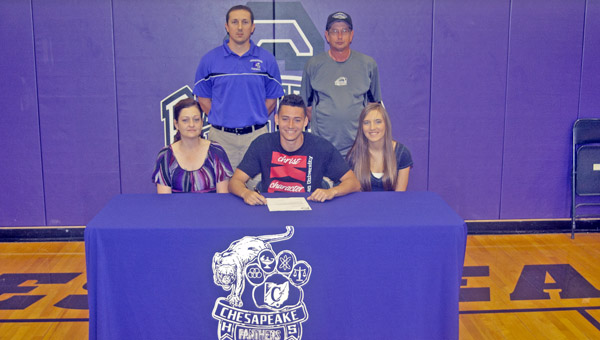 CHESAPEAKE — Javon Thompson is quite a receiver, but it was Kentucky Christian University who made the best catch.

The Knights grabbed the outstanding receiver as they signed the Chesapeake Panthers’ senior All-Ohio wide receiver to play football.

“They’re going to get quite a steal,” said Chesapeake head coach Andy Clark.

“He just continued to improve. He got a late start. He came out as a junior but he got better every day at practice and got better in games. He was a legit threat offensively.”

The 6-foot-1, 170-pound Thompson Thompson led the team with 24 receptions for 429 yards and five touchdowns. The remainder of the team had a combined 21 receptions.

Defensively, Thompson had 49 tackles — third on the team — and led the Panthers with seven interceptions while tying Nate Jones with four pass breakups.

“Coach Clark came up to me one day after my sophomore year and asked me if I wanted to play football and I said, ‘Sure, I’ll give it a try.’ Sure enough, (football) became my top pick for college.”

It was easy to think Thompson would play college basketball. A first team all-district and special mention All-Ohio player, Thompson averaged 18 points a game as he helped the Panthers win a share of the Ohio Valley Conference title. He also played in the Ohio-Kentucky All-Star Game.

Besides football and basketball, Thompson is an outstanding sprinter in track as well. He won three events at the OVC track meet.

“He’s a good athlete. That’s pretty evident. We moved him around a lot just to get the ball in his hands. I’m proud of him,” said Clark.

Thompson admitted he thought he would play basketball at the next level.

“Basketball was my top pick. I came into high school as a freshman just playing basketball. I thought for sure I was going to play basketball. It kind of grew weary on me,” said Thompson.

“As of now I’m just going to play football. Maybe once I get used to the college experience I might try basketball again.”

“The first school to offer me was Urbana. I thought for sure I was going to go there,” said Thompson.

“I was on my way (to KCU) and I didn’t think it would be one of my top picks because it’s a Christian school and I’m not that religious. I met the people there and all the people were nice there and the coaching staff was great. It became my top pick.”

Although the coaches do not plan to red-shirt him, Thompson said he has not been promised anything.

“I may not be a starter, but I will have the ability to compete for some type of jayvee playing time and maybe even varsity. It all depends on how hard I work,” said Thompson.

Clark said Thompson has increased his size and strength since football season and visualizes him making some type of contribution.

“I’m not familiar with their offense, but as a slot receiver that’s probably his best fit. The more he gets into a pass-oriented offense will help him get better,” said Clark.

“He’s one of those guys we had that if he’s got the ball in his hands he’s a threat to go to the house. It’s nice to have a player like that, but he’s got a lot he can improve on. Definitely, his best football is ahead of him.”

Thompson — who plans to major in business administration — is the son of Tara Thompson.