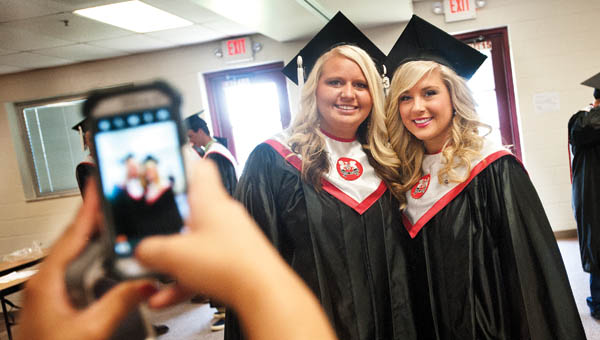 COAL GROVE — While many young women graduating this year are going to college to pursue a career in nursing or another medical profession, Rebecca Stapleton is going a different route.

“I’m going out to Collins at the adult career center and study welding technology,” Stapleton said. “I’ve always been interested in it and believe it or not women usually succeed in the field and often are top of their class.”

Stapleton said the program takes one to two years and she hopes to get a job at AK Steel when she has completed it so she can stay close to home.

Many of Stapleton’s fellow graduates are also choosing to stay close to home as well. Marshall University, Shawnee State University and Ohio University Southern are common destination for Dawson-Bryant graduates. Tyler Kerns is joining a smaller group of students heading to Ohio University in Athens to further his education.

Kerns said he’ll miss home, but he is excited to be moving away and living somewhere new. He said he would like to take his degree and do networking in the medical system.

The Dawson-Bryant High School class of 2013 motto is a quote from Dr. Seuss. The quote reads: “You have brains in your head. You have feet in your shoes. You can steer yourself in any direction you choose.”

A fitting motto, as the graduates walked across the stage as a class and now walk off in many directions to pursue their goals.