Panthers pounce on next step 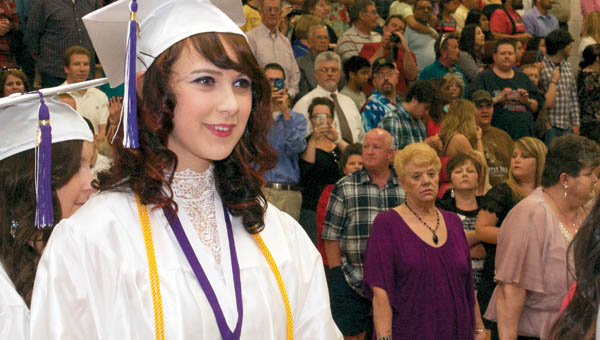 Chesapeake High School students look on as the rest of their class walk down to be seated before crossing the stage as graduates at the school’s commencement exercise Saturday evening.

CHESAPEAKE —Family and friends stood with respect as young ladies in shimmering white and young men in rich purple gowns made their way down through the crowd toward the stage where they would walk across and go from Chesapeake High School seniors to graduates.

The nearly 100 graduates, many who have been together their whole lives, will be moving on in different directions after leaving the brick walls of their high school. Some will go far, while others plan on taking their next step while staying close to home.

“It feels pretty good to go start my future at Marshall,” Allie Priddy, who will pursue a degree in nursing, said. “It’s kind of a family tradition. My mom, dad and cousins all went to Marshall.”

Priddy said she is specializing in pediatrics because she loves taking care of little children. She said after she completes her bachelor’s she would like work toward becoming a nurse practitioner and move to Florida because she loves the heat.

Brandon Clagg also seeks to serve his community. While Priddy plans to work as a healer, Clagg said he plans to join an area police force to work as a protector.

“I plan on going to the police academy this fall and then once I turn 21 go to the state police,” Clagg said. “I’m not just looking at Chesapeake, I’d be happy anywhere local.”

While many of his classmates are nervous about leaving high school, Clagg said most of his friends will still be in the area so it will be live as usual for the most part.

IHS grads ready to start next step in their lives