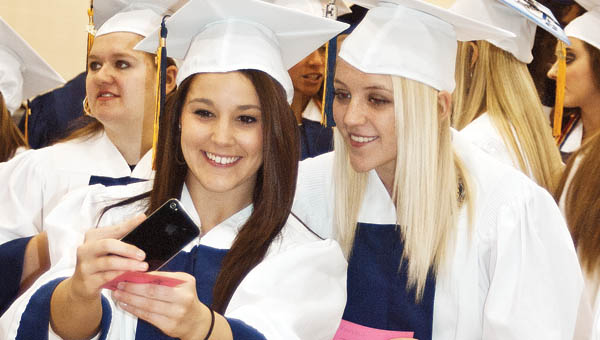 Roberto Moldonado called his achievement a “great hurdle” to overcome. The South Point High School graduate is the first in his family, in a long time, he said, to get a diploma.

“I feel pretty happy,” Moldonado said about his accomplishment and that his father would be there in support.

Moldonado’s father is a mechanic by trade and did not graduate from high school. The teen said his father encouraged him to strive for a better life and career.

“He would say ‘Bobby, go do something good. Don’t get stuck out in the heat,’” Moldonado recalled.

Moldonado said he and his father are moving south so he can attend Florida State University and major in biomedical engineering. The graduate said he was both sad and excited about the move.

“I’m going to leave a lot of good friends behind,” Moldonado said, adding that he hopes to keep in touch with them.

Emily Norris, co-valedictorian and class president, said that was at the heart of her remarks to her classmates.

“I hope we all stick together,” Norris said. “I think we got a lot closer at the end. You spend 13 years with them. You’re going to get close.”

On Sunday, 113 seniors graduated from South Point and Principal Jayshree Shah has some words of wisdom for them.

“My words of wisdom are to be lifelong learners,” Shah said. “Never give up learning. I wish them the best. This has been a great class.”

Shah said the Class of 2013 received about $1.3 million in scholarships. Most have plans to attend a two-year or four-year college, she said.