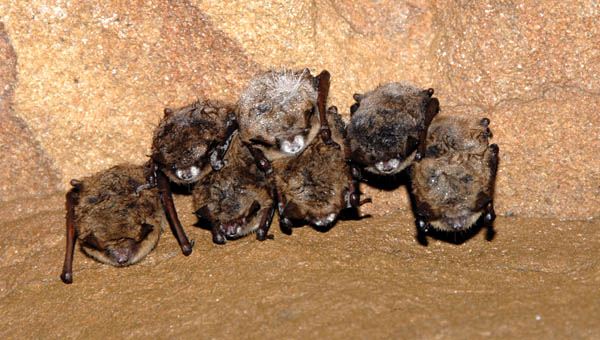 A naturalist checks out the habitat of the bats.

WAYNE NATIONAL FOREST — When bats hibernate during the winter they slow down their metabolism greatly, including their immune systems, that is when a cold-loving fungus that has killed millions of bats over the past few years takes the opportunity to attack.

The fungus, which causes a condition known as White-nose syndrome, has spread like wildfire since it was first discovered in New York in 2006. Wildlife officials confirmed the first case of White-nose on the Wayne National Forest in 2011 at the Ironton Ranger District.

“We’ve never had anything like this affect an area habitat this strongly before,” Angela Boyer, endangered species coordinator for U.S. Fish and Wildlife Service, said. “It’s still ongoing, it’s still spreading. We just don’t know what things will look like when it is all said and done.”

The fungus thrives in the caves and mines certain species of bats call home during winter. Boyer said all species of cave-dwelling bats on the WNF have been affected.

There is large concern for all bats affected, but perhaps especially so for the endangered Indiana Bat. One of only a few documented Indiana Bat hibernacula, the site bats use to hibernate during the winter, in Ohio is located within the IRD.

“In Ohio we are experiencing a significant decline in particular locations based on our winter census,” Boyer said. “We still have a lot of bats in Ohio, but we are expecting a continued decline during winter over the next few years.”

White-nose can be spread by bats themselves, or by humans who enter an infected cave or mine, become exposed to the fungus, do not follow proper decontamination protocols for their gear, and then enter another bat dwelling where they inadvertently spread fungal spores. Recognizing the spread from the North East, Jo Reyer, former Forest Supervisor of the WNF, issued a closure order of all underground mines, historic iron furnaces and tunnels within the Forest to help slow the spread of the disease and to protect bats during winter.

While it is not known yet exactly how White-nose kills infected bats, it believed to be dehydration or a burn-out of limited fat supplies during winter months, Katrina Schultes, wildlife biologist with the WNF, said.

“The theory is the fungus disrupts their hibernation physiology,” Schultes said. “They often try to exit [the hibernaculum] during the winter months because the fungus causes them to wake up and they realize they aren’t in a healthy environment.”

And going out into the frigid temperatures with limited fat supplies, and no food for them to replenish that supply, is believed to be a significant contributing factor to their death, Schultes said. But both she and Boyer agree, in the end there are still too many mysteries surrounding White-nose.

Schultes said everyone is doing everything they can to understand White-nose and ways to prevent its spread. She said there are massive monitoring efforts in effect and they are using the best available science to create forest management plans to best benefit the animals within.

The fast-spreading nature of the fungus, and its being responsible for a sharp decline in bat populations, is especially worrisome to the agricultural industry. A new release sent out by The Ohio State University Extension shortly after the first documented case in Ohio highlighted the financial burden farmers would face from reduced bat population. The release stated farmers could suffer more than $740 million a year in agricultural loses.

According to the United States Geological Survey, National Wildlife Health Center, White-nose syndrome has killed bats in 22 states and five Canadian provinces. While documented effects are still mainly concentrated in north eastern states and West Virginia, latest confirmed occurrences of White-nose are as far west as Missouri and south as northern Georgia.