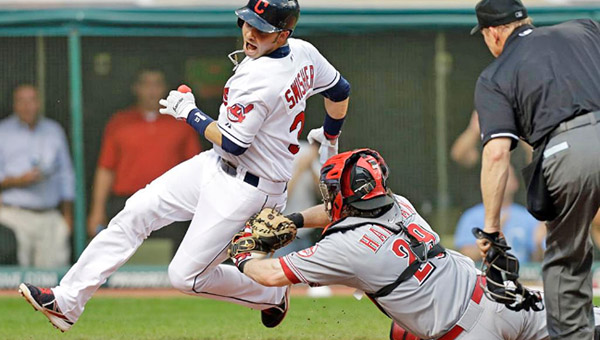 Cincinnati Reds’s catcher Ryan Hanigan tags out Cleveland’s Nick Swisher trying to score on a double by Jason Giambi during the fourth inning of Wednesday’s game. The Reds lost 5-2 to the Indians to end their five-game winning streak. (Photo Courtesy of The Cincinnati Reds)

CLEVELAND (AP) — Progressive Field continues to be a house of horrors for the Cincinnati Reds and pitcher Bronson Arroyo.

Jason Giambi hit a three-run homer and Mark Reynolds had a solo shot — both off Arroyo — and the Cleveland Indians snapped their five-game losing streak with a 5-2 win over the Reds on Wednesday night.

Cincinnati has lost eight straight interleague games in Cleveland, while Arroyo (5-5) became the first Reds starting pitcher to be charged with a loss since May 8. He allowed five runs and eight hits in 5 2-3 innings, while striking out three.

“That’s the way it goes, we got beat today,” said Arroyo, who is 0-4 with nine homers allowed and a 10.24 ERA in his last four starts against the Indians. “It was one of those nights when I didn’t have the sharp breaking ball that I needed, so I gambled by tipping everything I had early.

“With seven lefties in their lineup, it didn’t work out for me. I just didn’t have it.”

The Reds led 1-0 in the third when Reynolds homered to end Arroyo’s season-high scoreless streak at 16 2-3 innings, while Giambi’s three-run shot off the veteran right-hander came in the sixth and gave Cleveland a 5-1 advantage.

“When ‘G’ does something, everybody in there goes crazy,” Indians manager Terry Francona said. “He’s got a lot of fans in our dugout.”

Arroyo also allowed three straight doubles in the fourth, but the Indians only scored one run after Nick Swisher and Giambi made major baserunning errors.

In between those home runs, the Reds managed only four hits against Masterson and Indians relievers Cody Allen and Joe Smith. Cincinnati also went 0 for 4 with runners in scoring position in having its two-game win streak stopped.

The Reds fell to 18-6 in May, but are tied with Pittsburgh for the second-best record in baseball at 33-20.

“I thought we looked a little worn down tonight, but we’ll come back and all be fresh tomorrow,” Reds manager Dusty Baker said. “Bronson has been outstanding for us all year, but they had too many left-handed bats for him, and that’s what did us in.

“Then again, we didn’t hit Masterson either, so things didn’t go well both ways.”

Cincinnati’s best chance for a big inning came in the sixth when it loaded the bases with no outs, but failed to score in Masterson’s final frame.

With Cleveland holding a 2-1 lead, Paul hit a check-swing grounder back to the mound for a 1-2-3 double play. Catcher Ryan Hanigan followed with a fly to left to end the threat.

“(Masterson) has great stuff and he threw great tonight. He deserved to get the win,” Paul said. “He fooled me pretty good on that change-up in the sixth, but when you throw 93-96 (mph) with his movement and have a good slider, it’s going to be tough to hit him.”

In the bottom of the sixth, Giambi belted a three-run homer to extend the Indians’ lead to 5-1. In 21 career at-bats against Arroyo, he is hitting .381 with four homers and eight RBIs.

“Giambi really grounded me down in his previous at-bat,” Arroyo said. “He’s seen me a lot over my career and he saw everything I had tonight, so he knew what might be coming.”

Votto went 1 for 4, including his 10th homer of the season, and is batting .417 (40 for 96) this month. Second baseman Brandon Phillips had two hits for the Reds, while center fielder Shin-Soo Choo was 1 for 4 in his return to Cleveland.

Choo and third baseman Jack Hannahan both spent last season with the Indians. They were part of a three-team trade that sent outfielder Drew Stubbs from Cincinnati to Cleveland on Dec. 11, 2012.

“I only have great memories here in Cleveland,” said Choo, who batted .292 in 685 games for the Indians from 2006-2012. “The last few years, we played very well in the first half of the season, but we fell down in the second half. From what I’ve seen, this year looks different for them. They’re a very talented team.”