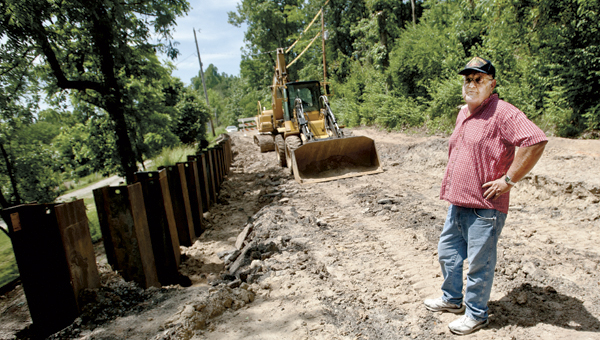 Area resident Dale Blakeman stands on a section of County Road 6 that is now blocked due to construction delays.

ANDIS — The torrential rains two years ago that washed out bridges and sent hillsides onto roadways in the county has meant massive repair work for the Lawrence County Engineer’s Office. Six of those landslides were so extensive the county had to contract the work out to larger construction companies.

Now at least one homeowner in the area of County Road 6 wants to know why the crew, in the middle of repairing that slide, left the job earlier this month and hasn’t been back.

“It was two weeks ago today,” Dale Blakeman said on Thursday. “It has been over 90 days and we aren’t halfway through. The road is blocked.”

Blakeman says some of his neighbors have to go eight to 10 miles out of their way to get to their destination.

“A lot of people come from Coal Grove to go to Symmes Valley,” he said. “It is a short cut. What upsets my neighbors and myself is they are not really working. I feel we are being dumped on. I thought the least Mr. Cade could have done is called the people and told them what is going on.”

Besides the inconvenience, there is the concern about how quickly an emergency vehicle could respond to the area, Blakeman said.

“They are concerned about an ambulance or fire,” he said. “There is no way to move the equipment. It is locked up.”

Alan Stone Company out of Cutler was contracted to fix the County Road 6 slip, which included drilling pilings into the hillside, at a cost of almost $600,000.

The reason the crew left that area temporarily was to help the county out with two others slips on County Road 48.

“They went and drilled those two for us before they take the drill equipment out of the county for other projects,” Lawrence County Engineer Doug Cade said.

That crew will be back at the County Road 6 project on Monday, with tentative completion date of mid-July.

As far as the complaints about possible problems that the temporary work stoppage has caused for those living in that area, Cade said there are a variety of routes in and out.

“There are multiple ways to that area from State Route 141 and State Route 217,” he said. “I am not sure how we are affecting their emergency services.”

Access from the north side comes from Aid and from the south from Andis, the engineer said.

“That is something we are very cognizant of when we make road closures, that citizens have access to emergency services,” Cade said. “No one from County Road 6 has brought that issue to my attention and never set up an appointment.”