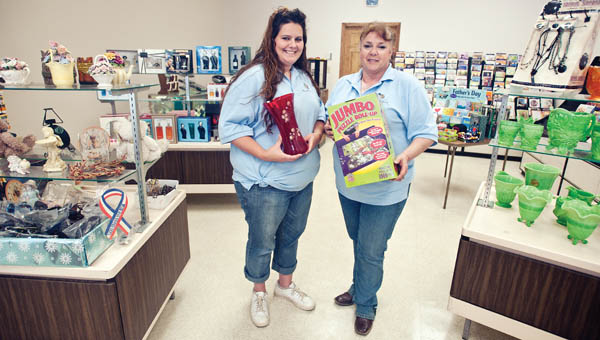 Dee Staley Best, right, pictured with her employee Kendra Friend has opened a new Ironton business Pack Horse, LLC that allows customers to pay their bills or shop for Fenton glass, games, perfume and much more.

When Staley’s Pharmacy merged with Fruth in March and many of the items weren’t going to be featured, Dee Staley-Best and crew grabbed what they could carry and marched it down Third Street to the building that would house her new business venture.

The Pack Horse, a true variety store, operates a UPS and Fedex shipping station, authorized bill paying outlet and a general store stocked with soda, candy and miscellaneous items. Staley said she really does not know what to label the store.

“We call it a utility bill payment center, but we do more than just that,” Staley-Best said. “A one-stop-shop is what we’d like to be and I think we are accomplishing that.”

The original idea for the Pack Horse was as a UPS and Fedex shipping station, but Staley-Best said she realized there would be no authorized agent where the community could pay utility bills. The store uses CheckFreePay, a company that has contract with a large number of business including AEP, Time Warner and Comcast.

Staley-Best said people come from all over the Tri-State to pay their bills at the Pack Horse because it is the only one of its kind in the area that offers such a variety of bill paying options.

Many of her customers are those who remain loyal to the Staley name. She said Staley’s Pharmacy offered bill paying services and many of those people followed her when she moved down the street.

“We are thrilled to continue being a service to the community,” Staley-Best said. “Really, this is all I’ve ever known, serving the community. My family has served this community since 1945 so when the pharmacy had to stop I picked up and came down here.”

And the community continues to serve her, She said. Monday she said the store had to open all three terminals and went almost non-stop as almost 600 bills were paid between 9:30 a.m. and 5:30 p.m.

It has been a busy couple of months, but Lonnie Best, Dee’s husband, said he has supported his wife from the beginning because he knew she had a good plan and the drive to make it work.

While the Pack Horse was created out of a bittersweet situation, its named after something Staley-Best loves. The businesswoman works with and shows quarter horses.