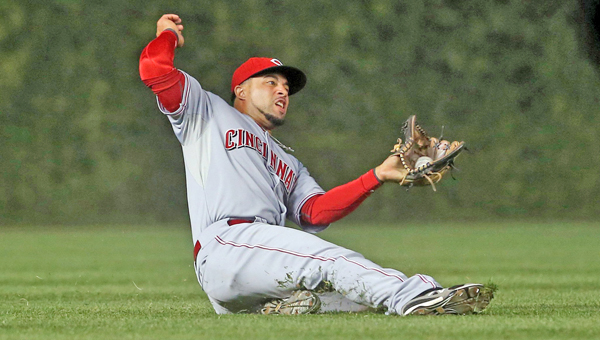 CHICAGO (AP) — Brandon Phillips and Homer Bailey were all the Cincinnati Reds needed to recover from a tough weekend.

Phillips hit a grand slam and matched his career high with six RBIs and Bailey pitched eight strong innings, and the Reds extended their dominance over the Chicago Cubs with a 6-2 win Monday night in foggy conditions at Wrigley Field.

Across town, the Chicago White Sox and Toronto Blue Jays were delayed over an hour because of dense fog but the Cubs and Reds were never halted.

The Reds were in a hurry to rebound from a weekend series loss to NL Central-leading St. Louis. The Cardinals had lost four of five overall.

“We were embarrassed over the weekend, personally and as an organization and as a team,” manager Dusty Baker said. “We’ll get them again many, many times.”

The Reds don’t play St. Louis again until Aug. 2-4, and before then will have to be content with beating the Cubs, something they do regularly. Cincinnati has won 10 straight at Wrigley Field, eight of 10 over the overall this season, and 17 of the teams’ last 20 matchups.

On Monday, all the Reds’ runs were driven in by Phillips, who had an RBI single in the first, connected off Scott Feldman (5-5) in the third and an RBI groundout in the eighth for his fourth-career game of six RBIs.

Phillips had been 2 for his last 12 but hit his 152nd home run as a Reds second baseman, tying Joe Morgan for the most by a second baseman in team history.

His six RBIs gave him 615, surpassing Morgan’s 612 for the most as a Cincinnati second baseman.

“It just means I’ve been over here too long to do that because Joe Morgan is the best second baseman to play this game,” Phillips said. “For me to be in the same category as him, it’s an honor.”

Bailey (4-4) didn’t make any history, but he gave Cincinnati exactly what it needed and picked up his first win since May 25 against the Cubs.

He gave up one unearned run and four hits while striking out eight to improve to 7-2 against Chicago, which fell to 7-19 in the NL Central. Bailey threw 120 pitches, his second most of the season and third 100-plus pitch start of the season, sparing a bullpen that worked four innings in Sunday’s 11-4, 10-inning loss to the Cardinals.

Going deep into the game and trying to save the bullpen wasn’t on Bailey’s mind, however.

“If you do that you’re not going to make it out of the fourth,” Bailey said. “I just wanted to be aggressive and try to be very efficient.”

He pitched six innings and allowed five runs and seven hits to lose his first decision since May 24 at Cincinnati, the other time he’s allowed five earned runs this season.

Unfortunately for Feldman, the Reds did not have trouble in the fog. The Cubs lost for the sixth time in eight games since a five-game winning streak.

“I was hoping it would make it harder for them to pick up the ball,” Feldman said. “Apparently it didn’t work.”

Baker said he lost track of Luis Valbuena’s fly ball to left during the bottom of the first that was caught by Xavier Paul, and he and Cubs manager Dale Sveum had doubts whether the game would continue.

“Obviously it couldn’t get any worse otherwise you’d have to stop it,” Sveum said “It was borderline as it was.”

There was no doubt about how much Cincinnati needed to win Monday after a tough weekend against a team Phillips called the best in baseball.

“For us to come out and play the way we did today, it’s awesome,” Phillips said. “We bounced back from a loss, a tough loss we had at home. We just came here and got key hits in key situations, and got a

NOTES: The Reds announced before Monday’s game they will call up LHP Tony Cingrani to start Tuesday. Cingrani (2-0, 3.27) will start in place of Johnny Cueto, who was placed on the 15-day disabled list June

5, retroactive to June 1, with a strained right shoulder. Cingrani will face Matt Garza (1-0, 4.03). … The Reds announced they have signed first-round pick Phillip Ervin, an outfielder taken with the 27th overall selection, from Samford University. . Shin-Soo Choo was hit to lead off the game, his NL-leading 18th time getting hit by a pitch. … Starlin Castro went 1 for 4 and is 4 for his last 42. … Cubs RHP Shawn Camp, on the DL since May 22 with a sprained right big toe, will pitch for Class-A Kane County on Tuesday and again Friday before

being evaluated. RHP Kyuji Fujikawa is in Birmingham, Ala., and is expected to have Tommy John surgery Tuesday. . Baker said “as far as I’m it’s concerned it’s over” and Sveum said there’s “nothing to that situation” when asked about the teams’ May 26 game in Cincinnati. Cueto threw a pitch over the head of David DeJesus, leading to Garza calling Cueto “immature” and Baker saying the two pitchers should “box and let it be over with.”