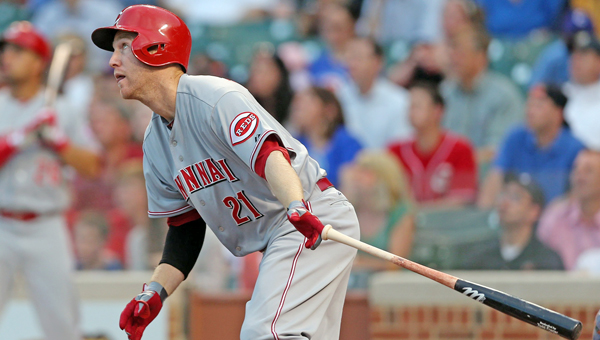 CHICAGO (AP) — Dusty Baker doesn’t follow the records. He is keeping count as the Reds keep piling up wins at Wrigley Field.

The former Cubs manager was surprised to hear that 11 games is the most consecutive wins by an opponent at Wrigley.

“Really? I’ll tell you, I am not an accountant. But I do know how many. It’s a nice count,” Baker said with a sly smile.

Cingrani, from Chicago’s South Suburbs, allowed two runs and four hits, while striking out five and allowing one walk.

Zack Cozart also added a three-run shot in the eighth and Todd Frazier hit a solo home run in the second inning for the Reds.

Baker also passed Ralph Houk for 16th place on the all-time win list for a manager with 1,620 victories.

“It’s pretty cool. We’re comfortable here. Our pitching has been doing what they have always been doing and we feel really relax here and we know coming in we will have a really good shot,” said Frazier.

“For some reason, we do like playing here in Chicago, but we’re happy go lucky. It’s pretty fun, it gets us back on the winning track. We got two more to go, we’re trying to get that sweep.”

Garza (1-1) was tagged for a career-high nine runs and nine hits in five-plus innings. He was lifted in the sixth after allowing six runs without retiring a batter.

Garza dropped to 0-2 against the Reds this season, allowing 13 runs in nine innings. The three homers he gave up were the most since last July 5 at Atlanta.

Cody Ransom hit a solo home run for the Cubs, who have lost seven of their last nine games. The third baseman committed three of Chicago’s four errors as the Cubs suffered their worst defeat of the season.

With two outs in the second, Frazier connected on a 1-2 pitch that wound up in the center-field basket for his seventh home run of the season. It was his first homer on the road this year and first one since April 24th.

An inning later, Votto tagged Garza for a two-run shot. It was Votto’s 11th of the season. Votto is 16 for 30 with seven doubles, one home run and eight RBIs during a nine-game hitting streak at Wrigley.

The Reds added six runs for Cingrani in the sixth. Jay Bruce lined a double down the left-field line to drive in two runs. After Garza hit Frazier with a pitch, Paul followed with a three-run homer to right. After chasing Garza, Cozart added an RBI single to give the Reds a 9-1 lead.

Bruce was 3 for 5 with two RBIs as Cincinnati finished with 17 hits.

Ransom scored on Alfonso Soriano’s sacrifice fly in the fourth. Ransom hit his seventh homer of the season in the sixth.

Cozart cleared the bases on a three-run homer in the eighth inning off Cubs reliever Zach Putnam. Putnam left with an apparent injury after giving up the home run.

“He’s got a bone spur that he battled over a year now, he said it was just on fire, so I think well get an MRI on that tomorrow,” said Sveum.

NOTES: The Cubs suspended Triple-A infielder Ian Stewart on Tuesday without pay for an indefinite period following his critical comments about the organization. … RHP Mike Leake is Wednesday’s scheduled starter for the Reds. He is 3-1 in his last five starts with a 1.13 ERA. … On Wednesday, Cubs starter Travis Wood will try for the fifth time to beat his former team. He is 0-2 with a 5.25 ERA against the Reds. … After the game, the Cubs acquired RHP Henry Rodriguez from the Nationals for minor league RHP Ian Dickson.