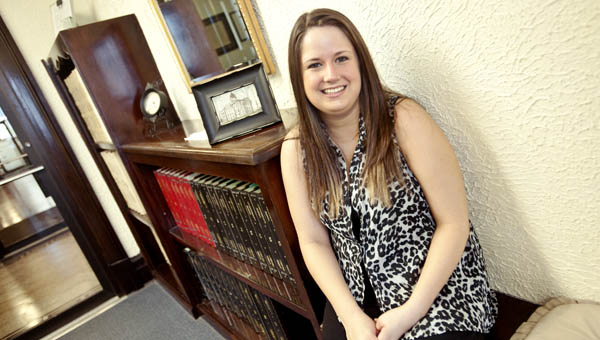 Ohio University student Fawn Hoffman will be serving as an unpaid part-time intern this summer in the Lawrence County Commissioners office.

Fawn Hoffman was only 10 when George W. Bush and Al Gore took the 2000 Presidential election down to the wire and then some.

The Rock Hill student was way too young to vote, but if she could have it would have been for the Texas Republican.

But as election night dragged on, with the results ultimately in the hands in the Supreme Court, Hoffman had to go to bed.

“My first question the next morning was did ‘W’ win,” she said.

That enthusiasm for politics was initially fueled by her fourth grade teacher, Rhonda Hacker, and fanned into a passion by her parents.

“She really encouraged us to get involved with the election within the classroom,” Hoffman said. “I asked my parents what they thought and they said watch for myself. The news was always on at home.”

That love for the political arena has not abated.

Now for the summer Hoffman is getting an education in politics and government, grass-roots style, as an unpaid intern with the Lawrence County Commission.

“I want to understand how local government works,” she said. “Local government has the ability to be close to the people and hear more individual voices. Water, the jail, food stamps. Those are state and local issues.”

Twice a week Hoffman comes into the Lawrence County Courthouse, well aware it is a seat of power, to help answer phones and do the legwork to answer constituents’ questions.

“First it is intimidating,” she said. “This is where everything happens. It runs the whole community. The commissionerd, I’m still a little scare of them. They have all the power.”

However, this is not her first experience with Ohio politics. Last summer Hoffman was an intern with U.S. Rep. Bill Johnson, a man she calls genuinely caring for the people in the state.

Academically, her next goal is to get a master’s degree in public administration from Marshall University. Then she hopes to work for a non-profit organization focusing on community service.

“That is the best way to help people, to reach the community that way,” Hoffman said. “You take care of others. That was taught to us at home. We would give our older clothes away, our older toys.”

The young woman calls herself a moderate Republican who believes in bipartisanship.

“It is really important,” she said. “We are all in this together. We are all Americans, as corny as that sounds. Republicans blame stuff on the Democrats and vice versa, instead of listening to the ideas.”

In 2008 Hoffman cast her first vote in a presidential election, supporting Sen. John McCain’s bid for the White House.

“He is very bipartisan and that is, I think, what cost him the election,” she said.

While she says she will never run for public office, public service is the driving force of her future career plans.

“I think God has a plan for everyone,” Hoffman said. “It is not about me. We are to help the other people God created.”

Officials back off on annexation

CHESAPEAKE — Chesapeake village officials won’t pursue their plans to annex the western end of the village. “It is on... read more