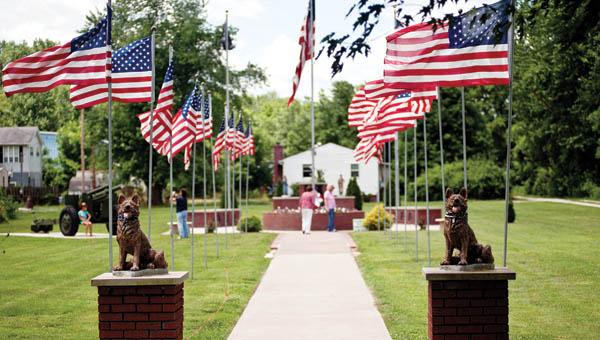 Visitors stop to check out the Southeast Ohio War Memorial in Proctorville Friday before the start of a Flag Day ceremony presented by the Proctorville VFW 6878.

PROCTORVILLE — The flags were faded, tattered and torn, stacked on top of each other on a picnic table near the memorial of the VFW Post 6878 in Proctorville.

Soon they would be consumed in flames, ending their time as the symbol of the freedoms of the United States.

These stars and stripes were part of this year’s burning ceremony at the post’s Flag Day celebration on Friday.

“The flag should be viewed as a living emblem of a courageous people,” John Weber, adjutant of the post, told the audience. “(The flag is burned) when it is no longer suitable to represent our nation.”

The flag-burning ceremony is an annual event at the post to demonstrate proper flag etiquette.

“The flag code is rather precise when dealing with the flag of the United States,” Weber said.

It should never be flown if it is frayed or stained. It should always be lit with its own lighting when flown at night.

After showing the proper way to fold the flag, Post Commander Warren Napier and Weber began the ceremonial burning.

Holding each flag by a stick over a burn barrel, Napier dipped the cloth into the flames, allowing it to be consumed in pieces. One after another the flags were burnt. Occasionally a strong breeze blew the smoke from the barrel across the memorial’s lawn.

“Some would have us believe that patriotism is out of style,” Napier said. “We at the VFW don’t think that way.”