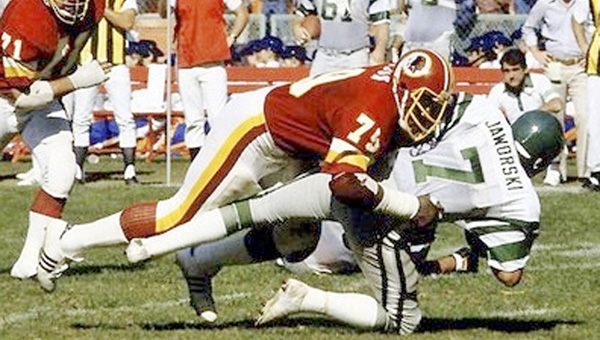 Former Ironton High School football standouts Coy Bacon (above) and George McAfee are being inducted into the Kentucky Pro Football Hall of Fame on June 28. (Photo Courtesy of Coy Bacon)

George McAfee and Coy Bacon are part of this year’s inductees to the Kentucky Pro Football Hall of Fame.

McAfee was born in Corbin, Ky., Bacon was born in Cadiz, Ky, but both grew up in Ironton and played for the Fighting Tigers.

The inductions ceremonies will be Friday, June 28, at The Louisville Palace. Tickets are $25, $50 and $75 and will be available online at a soon to be announced date.

The two-day celebration will include a golf scramble, ring ceremony and other activities.

McAfee was an All-Ohio quarterback at Ironton in 1935 and led the Fighting Tigers to their first unbeaten season. He played at Duke where he was a two-time All-American and went on to play for the Chicago Bears.

McAfee played from 1940-41 before serving in World War II. He returned to play from 1945-50. He was nicknamed “One-Play McAfee” and was known for his explosive speed.

McAfee had 25 interceptions in eight seasons on defense, scored 234 points and gained 5,313 combined net yards. His 12.78 yards per punt return is still and NFL record and he led the league in 1941 with an amazing 7.3 yards per carry average as a running back.

Bacon was a standout lineman and basketball player for Ironton and went on to play at Jackson State and then spent 14 years in the NFL.

Bacon — who was born Lander McCoy Bacon — was one of the greatest defensive linemen in NFL history. A great pass rusher, he began his pro career with the Charleston (W.Va.) Rockets, a minor league team, and then spent a couple of seasons on the Dallas Cowboys’ taxi squad.

Bacon was dealt to the Los Angeles Rams where he played from 1968-72 when he made his first of three Pro Bowls. He also played with the San Diego Chargers, Cincinnati Bengals and Washington Redskins.

Bacon was an All-Pro in his two seasons with the Bengals (1975-76) and set a team record with 21.5 sacks, the former record that has since been broken by Mark Gastineau and then Michael Strahan.

The original total was 26 but downgraded by the NFL.

Bacon — who died in 2008 — was named to the American Football Association’s Semi-Pro Football Hall of Fame in 1986.

Eastern Kentucky’s Chad Bratzke who was the Ohio Valley Conference defensive Player of the Year. He played with the New York Giants and Indianapolis Colts;

Louisville linebacker Otis Wilson went on to play with the Chicago Bears and was part of the 1986 Super Bowl champions.

Irv Good played at Kentucky. He played for the St. Louis Cardinals and Miami Dolphins including the 1972-73 Super Bowl championship teams.