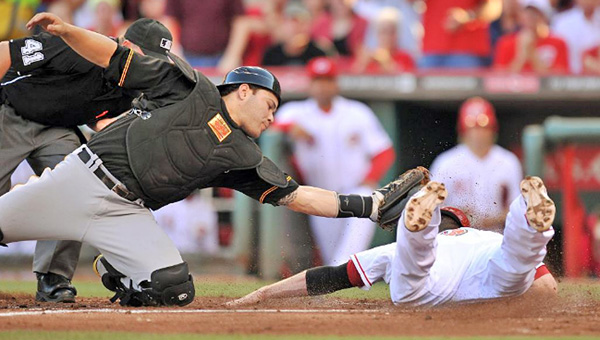 Cincinnati’s Zack Cozart (rght) is ruled out at home as Pittsburgh catcher Russell Martin attempts tag the runner and end the second inning. The Reds rallied and beat Pittsburgh 2-1 in 13 innings. (Photo Courtesy of The Cincinnati Reds)

CINCINNATI (AP) — Jay Bruce had barely put the ball in play whenever he faced Jason Grilli. His first career hit off the Pirates’ closer was some breakthrough.

Bruce ended Grilli’s saves streak with a solo homer in the ninth, and Brandon Philips singled with the bases loaded in the 13th inning on Wednesday night, rallying the Cincinnati Reds to a 2-1 victory over the Pittsburgh Pirates.

Two outs away from a second straight shutout, the Pirates let it get away.

Grilli started the ninth needing one more save to tie a club record. He had converted each of his 25 chances this season, one shy of Joel Hanrahan’s 2011 club record to open a season.

With one out, Bruce came up with a daunting personal history — 0 for 7 in his career against Grilli with five strikeouts. He waited on a first-pitch fastball and got it, connecting for his fourth homer in his last six games.

“They threw him one fastball too many,” manager Dusty Baker said.

It was the first homer Grilli had allowed this season. Cincinnati hadn’t scored in its last 17 innings since Bruce hit a solo homer during a 4-1 win on Monday night.

“I’ve had pretty good success against him,” Grilli said. “You feel horrible because the bullpen has been working a lot and we had to go extras and work harder. You lose a tough ballgame in an important series.”

Manny Parra (1-1) pitched the 13th, and the Reds won it against Vin Mazzaro (3-2). Derrick Robinson and Shin-Soo Choo singled with one out, and Joey Votto was walked intentionally. Phillips singled up the middle to end it.

“That’s what Brandon does,” Bruce said. “I’ve been watching him for six years, so I’m a little accustomed to it.”

Phillips was hit on the left forearm in Pittsburgh on June 1 and missed four games with a bruise. He was batting only .164 since he got back in the lineup.

“I haven’t been feeling right and I was doing things I don’t normally do,” Phillips said. “I felt a little better today.”

The Reds are 5-7 in extra innings, tied with Colorado for most in the majors. They’ve gone extra innings in three of their last seven games. The Pirates are 4-4 after their longest game of the season.

Cincinnati has held onto second place in the NL Central by winning two of three in the series, which concludes on Thursday.

Pittsburgh left-hander Jeff Locke gave up only four hits and three walks in seven innings. Starling Marte tripled and scored on an error by pitcher Bronson Arroyo in the third.

Both teams wasted chances to end it earlier. The Reds had a runner thrown out at the plate, and the Pirates left the bases loaded twice and got two runners picked off. Also, Bruce stretched to the top of the wall in right to rob Andrew McCutchen in the seventh.

Arroyo gave up six hits in seven innings. He hit Russell Martin in the back of the left shoulder with an 88 mph fastball in the fifth inning. Alfredo Simon hit Jordy Mercer in the back in the ninth, the 18th time a batter’s been hit during the nine games between the teams this season.

The Pirates pulled off an unusual relay to cut down a runner at the plate in the second inning. Zack Cozart tried to score from first base on Ryan Hanigan’s two-out double to left. Marte’s throw to the infield went over Mercer’s head at shortstop, but second baseman Neil Walker was backing up the play, made the relay and got Cozart.

NOTES: The Reds haven’t been shut out in back-to-back games since Aug. 30-31, 2011, when they lost to the Phillies 9-0 and 3-0. … Pirates LHP Wandy Rodriguez, on the DL with tightness in his left forearm, will throw 35 to 40 pitches off a mound on Thursday. If he has no problems, he’ll make a rehab start in the minors on Sunday. … Arroyo had another scoreless first inning. He has allowed one run total in the first innings of his last 19 starts. … RHP Homer Bailey starts the final game of the series for Cincinnati. He’s 8-2 in career against Pittsburgh, including a no-hitter at PNC Park last September. RHP Brandon Cumpton makes his second career start for the Pirates.