Surprise! Cavaliers stun everyone by making Bennett No. 1 pick in NBA draft 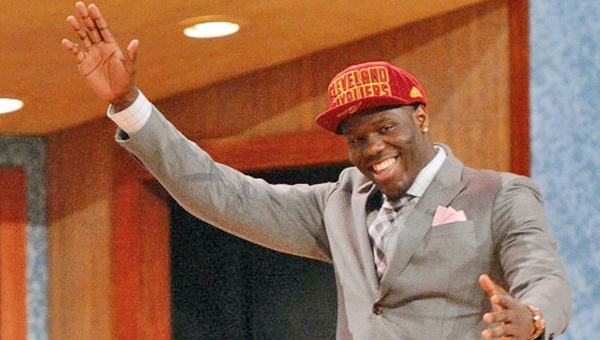 The Cleveland Cavaliers surprised everyone by making UNLV forward Anthony Bennett the first pick in the NBA draft on Thursday. Most experts had Kentucky’s Nerlens Noel projected as the first selection. (MCT Direct Photo)

NEW YORK (AP) — Anthony Bennett was stunned at the start. David Stern had a big surprise at the finish.

In between, Nerlens Noel and a number of others experienced wild rides to start their careers in an unsettled first round of the NBA draft.

Bennett became the first Canadian No. 1 overall pick, and Noel tumbled out of the top five and right into a trade, the first of many moves that took a back seat to one in the works for the team that calls Barclays Center home.

The Brooklyn Nets will acquire Paul Pierce and Kevin Garnett from Boston in a blockbuster deal that was still developing as the draft neared its conclusion, according to a person with knowledge of the details.

“There was a lot of activity,” said Nets general manager Billy King, who wouldn’t comment on the trade. “As you guys will find out, there will be a lot of trades that are announced.”

His can’t be until July 10, after next season’s salary cap is set.

As for the draft, it was as unpredictable as expected, capped by Hakeem Olajuwon coming on stage at the end of the first round to greet Stern, dressed in the same tuxedo style he wore when Stern called his to start the soon-to-be retired commissioner’s first draft in 1984.

One of the favorites to be taken first Thursday night, Noel fell to No. 6, where the New Orleans Pelicans took him and then dealt his rights to the Philadelphia 76ers for a package headlined by All-Star guard Jrue Holiday, according to a person familiar with the details.

The Cleveland Cavaliers started things by passing on centers Noel and Alex Len, who went to Phoenix at No. 5, in favor Bennett, the UNLV freshman forward who starred for Canada’s junior national teams and was the Mountain West Conference freshman of the year. Bennett led a record 12 international players who were taken in the first round.

“I’m just as surprised as anyone else,” Bennett said.

There was suspense right until the end, either because the Cavs were unsure who they wanted or were trying to trade the pick. Most predictions had them taking one of the big men, with Noel largely considered the favorite for the No. 1 choice even after a torn ACL that ended his lone season at Kentucky in February.

“I thought everything was in the air, so I wasn’t thinking I was the No. 1 pick,” Noel said.

Stern, booed heavily in his final draft, added to the surprise of the moment by pausing slightly before announcing the Cavs’ pick, their first at No. 1 since taking All-Star Kyrie Irving in 2011.

Orlando passed on both of the big men, too, going with Indiana swingman Victor Oladipo with the No. 2 pick. Washington took Otto Porter Jr. with the third pick, keeping the Georgetown star in town.

Ten years after the Cavaliers selected LeBron James to start a draft that included future NBA championship teammates Dwyane Wade and Chris Bosh in the top five, this one lacked star power and perhaps even the promise of stardom.

Bennett, Noel and Len are all coming off injuries and couldn’t even work out for teams, but the Cavs decided Bennett’s shoulder surgery wasn’t enough cause for concern.

Len walked up to meet Stern and collect his orange Suns hat, then sat down near the stage to put on the walking boot he needs for the stress fracture of his left ankle that was discovered after Maryland’s season.

Noel finally went to New Orleans with the next pick. He didn’t seem upset at his fall down the draft board, hugging his mother and shaking hands with Kentucky coach John Calipari.

It was a good start to the night for the Hoosiers, with Cody Zeller going to the Charlotte Bobcats two places after Oladipo.

Headed by a lackluster class, the draft promised confusion and second-guessing, with no consensus No. 1 pick and little agreement among the order of the top five.

And with lesser-known names in the draft, veterans soaked up the spotlight in the hours leading up to it.

Yahoo Sports first reported that the Nets and Celtics were working on a trade that would complete the breakup of the Celtics’ veteran core.

ESPN reported earlier Thursday that Dwight Howard was unlikely to return to the Los Angeles Lakers when he becomes a free agent next month.

The guys coming into the league were glad for the attention they did finally get once their names were called.

“It’s like a weight vest you took off after running five miles,” Oladipo said. “It’s relaxing, man. But at the same time, you know it’s just getting started.”

National player of the year Trey Burke of Michigan also was traded, the Minnesota Timberwolves sending his rights to Utah for the rights to Shabazz Muhammad and Gorgui Dieng, the Nos. 14 and 21 picks.

Lehigh’s C.J. McCollum rounded out the top 10 by going to Portland.

Stern, retiring in February, seemed to play up the boos, which turned to cheers after every pick, fans perhaps as puzzled as some of the players at the names they were hearing.

“I was just kidding my agent because he didn’t bail me out,” Zeller said. “He didn’t tell me. I didn’t know until David Stern announced it. It’s a crazy process not knowing, but I’m definitely excited that I ended up with the Bobcats.”

Other players couldn’t get too excited about their new addresses, because they changed quickly.

Stern was announcing deals by the middle of the first round and they promised to keep coming after he called it a night and turned things over to Deputy Commissioner Adam Silver for the final 30 picks.

The flurry of trades wasn’t surprising with so much uncertainty surrounding this class and so much hope in other areas. Teams such as Houston, Dallas and Atlanta already have an eye on Howard’s future, needing to have necessary salary cap space to offer a maximum contract that could lure him away from Los Angeles.

The 2014 class — which could be topped by a second straight Canadian in incoming Kansas freshman Andrew Wiggins — will be higher regarded than this one, with James perhaps heading the available free agents to follow.

Stern made his final pick to close the first round to cheers of “David! David!” before handing things off to Silver.

At The Barclays Center

Team-by-team breakdown of the players each team ended up with in the draft:

Trades that involved selections in the 2013 NBA Draft on draft night:

4 — Minnesota traded the rights to first-round (No. 26) selection Andre Roberson, f, Colorado to Golden State for a future second-round pick.

NEW YORK (AP) — The Brooklyn Nets will acquire Paul Pierce and Kevin Garnett from the Boston Celtics in a... read more