Reds’ offense shuts down in loss to Seattle 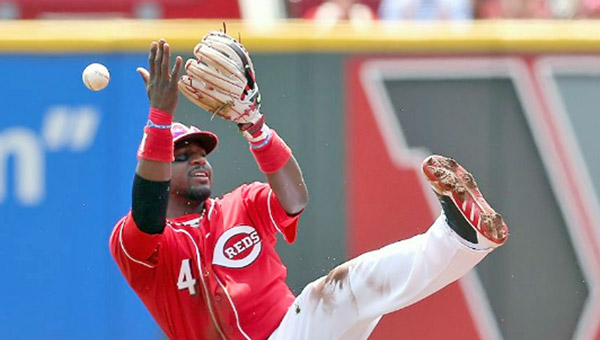 CINCINNATI (AP) — After an offensive outburst on Saturday, the Cincinnati Reds thought they could keep slugging away on Sunday.

Especially against a Seattle Mariners pitcher who had allowed 15 earned runs in four previous starts against them.

Instead, Joe Saunders shut them down.

The Reds managed just six hits and a run off the left-hander in a 3-1 loss that manager Dusty Baker said wasn’t as bad as it seemed.

“We hit the ball a lot harder than the scorebook showed,” Baker said. “We didn’t have a lot to show for it. I tell the guys to just keep swinging the bats.”

Saunders pitched seven efficient innings, allowing only two baserunners to reach third in the first six and retiring 11 consecutive batters before Chris Heisey doubled into the left-field corner with one out in the fifth inning.

“We’ve hit Saunders well in the past,” Baker said. “I thought we’d manage more than one run.”

Saunders (7-8) walked none and struck out two while winning back-to-back starts for the first time this season.

Charlie Furbush pitched a 1-2-3 eighth and Tom Wilhelmsen was perfect in the ninth for his 18th save, helping the Mariners pick up their second win of the three-game series and improve to 10-2 against the Reds since interleague play began in 1997.

The Reds went down in order in six of their nine innings.

Nick Franklin and Justin Smoak accounted for all of Seattle’s runs with homers off Bronson Arroyo (7-7), who overcame a 32-pitch first inning to complete six, allowing five hits and three runs with one walk and six strikeouts. The right-hander retired 10 of the last 11 batters he faced despite facing a lineup loaded with eight left-handed batters. He wasn’t surprised that the Mariners relied on the long ball.

“They have a bunch of unknown guys,” he said. “We don’t know much about American League teams, especially in the West (Division). They came out and hit the ball out of the ballpark, and that was the difference in the series. I was never really in a groove. It was a hard-fought battle. They had eight left-handers in the lineup. I needed a lot of max-effort pitches.

“I had to take every inning as a do-or-die effort just to give us a better shot at getting back in the game.”

Franklin hit Arroyo’s 10th pitch of the game 380 feet into the right-field seats for his sixth home run of the season and second in the first inning in three games. He hit a two-run homer Friday off Mike Leake, also in the first inning.

“They jumped up early on us in all three games,” Baker said. “You just can’t lay it in there. That’s a lineup you don’t know a whole lot about. By the time you learn something, they’ve hit a home run.”

Smoak extended the lead to 3-0 with a two-run drive on the first pitch he saw from Arroyo with two outs in the third inning. The 378-foot shot, which followed Kyle Seager’s one-out walk, was Smoak’s seventh.

“It’s an American League lineup — full of left-handers,” Baker said. “We didn’t match up right. It didn’t work out right.”

The Reds broke up the shutout bid in the seventh with back-to-back one-out doubles by Todd Frazier and Heisey before Saunders finished his day by getting Ryan Hanigan and pinch-hitter Derrick Robinson to ground out.

NOTES: Franklin’s home run was the club-record 235th allowed by Arroyo in his eight seasons with the Reds. He went into the game tied with former LHP Tom Browning for the record. … It was the Mariners’ 22nd first-inning homer this season, most in the majors. … Raul Ibanez extended his hitting streak to 12 games (18 for 50, .360) with a first-inning single to left. … The Reds left after their 4-2 homestand on a seven-game road trip, starting with three at Milwaukee. RHP Homer Bailey, who threw a no-hitter against the Giants on Tuesday, will try to match Johnny Vander Meer’s 1938 feat of no-hitters in back-to-back starts. … After going 4-2 on their road trip, the Mariners are scheduled to open a seven-game homestand with four against Boston. All-Star pitchers Felix Hernandez and Hisashi Iwakuma are the Mariners’ projected starters on Monday and Tuesday.