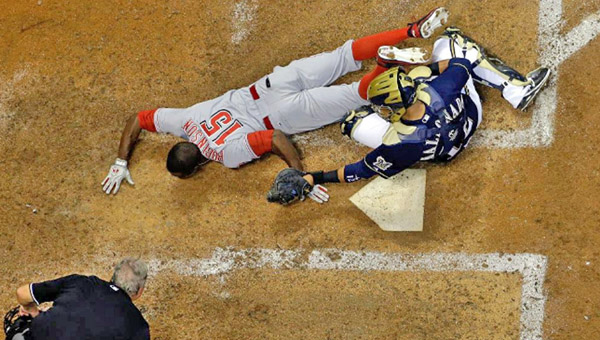 Cincinnati’s Derrick Robinson (15) is tagged out at home plate by Milwaukee Brewers’ catcher Martin Maldonado as he tries to complete a potential inside-the-park home run. The Reds lost 2-0. (Photo Courtesy of The Cincinnati Reds)

Problem is he ran into Wily Peralta on the best night for a Brewers starter in over two years.

Milwaukee’s wildly inconsistent right-hander tossed a three-hit shutout Tuesday night to give Milwaukee a 2-0 victory over the Reds and the team’s first complete game since Yovani Gallardo’s two-hit shutout on April 5, 2011 — a span of 407 games that the Brewers said was the longest such drought in major league history.

That left-hander was Logan Schafer, who provided Peralta all the support he needed, driving in both runs with his first career homer.

Peralta (6-9), whose start was pushed back from Sunday to give his ailing left hamstring a few extra days of rest, struck out six and walked four. He was aided by two double plays and also picked a runner off first. The Reds also had a runner thrown out at home.

Schafer, a last-minute replacement for Norichika Aoki, broke up the scoreless duel in the fifth. Martin Maldonado battled back from an 0-2 count for a leadoff walk and Schafer drove the first pitch 429 feet over the wall in right-center to put the Brewers up 2-0.

“One mistake, well, two mistakes; the walk and then I tried to get a head of Schafer and he jumps me,” said Cingrani. “It’s frustrating. I thought I did my job.”

Derrick Robinson was within a hand swipe of putting the Reds on the board in the seventh when he sliced an opposite-field triple into the left-field corner. The ball eluded left fielder Jeff Bianchi, normally a utility infielder who came on to start the inning as a defensive replacement for Ryan Braun. Robinson tried to score on the play but was nailed on his reach back slide at home on a perfect relay throw from shortstop Jean Segura.

“Of course, as soon as you get out there, you get a tough play,” Brewers manager Ron Roenicke said. “I don’t remember balls hitting off that railing too often. They don’t go up there.”

The Reds also threatened in the ninth when Joey Votto walked with two outs and advanced on a wild pitch, but Brandon Phillips grounded out to short.

Roenicke said he probably would have pulled Peralta had Phillips gotten on.

Braun, in the starting lineup for the first time since going on the disabled list June 10, singled in the first inning on the first pitch he saw. He grounded out to short and flied to right before being lifted.

NOTES: Aoki was in the starting lineup in right field and as the leadoff hitter, but was a pre-game scratch with left elbow tightness. … Reds left fielder Chris Heisey left the game after getting hit on the left elbow by a pitch from Peralta in the second inning. X-rays were negative. “He said his feeling didn’t come back and that’s why we took him out,” Baker said. “I don’t think he’s playing tomorrow.” . Reliever Sam LeCure pitched one scoreless inning, extending the Reds’ bullpen scoreless streak to 23 1/3 innings, spanning eight games. . The victory was only the fifth of the season for the Brewers when scoring less than four runs (5-33).

CANTON (AP) — Long before rain suspended play for half the field early in the evening, Corey Richmond staked a... read more