Starlite 4-Hers ‘hog’ the spotlight 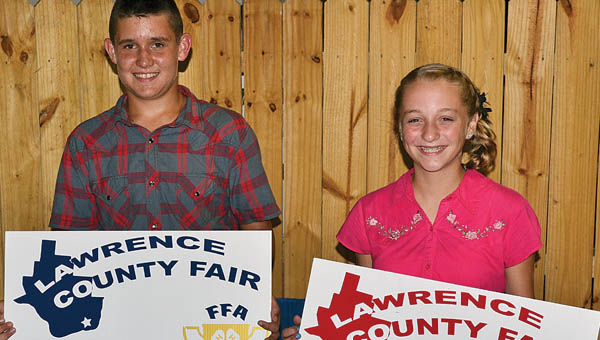 Hunter Humphreys, who carried away the grand champion trophy, and Kara Saunders, earning the reserve champion honor, are used to competing against each other in the classroom as soon-to-be seventh graders at Symmes Valley. But this night they were battling in the sawdust-floored livestock arena, showing two of the 114 hogs from 11 weight classes.

Some pigs trotted calmly beside their owners while others darted left and right, oinking and squealing all the way. It took prodding from the show sticks and some directing with the hog blockers — red plastic shields of a sort — to keep them in line.

But this competition was about how the animals looked not how they acted.

Although the hogs may not have understood the honors they had earned, their teenage owners certainly did.

“It feels good,” Hunter, the 13-year-old son of Darrell and Sarah Humphreys, said of winning the top prize in his third year showing hogs. “It takes a whole lot of time and effort. It is not just like watching it once a week. You have to walk them and be careful what you feed them.”

“He has worked hard,” Sarah said.

Hunter’s pig, Super Dave, might have some gender issues, but judge Steve Ehman of Tipton, Ind., said she — yes, Super Dave is a girl — and Kara’s pig, Daisy Bale, both looked great.

“They were really correct on the feet and the legs, the extension to the front end. Both champions were bold about their shoulders and that continues back to the loin and rump structure,” said Ehman, who has been judging a variety of livestock at events big and small for more than 40 years and in more than 40 states.

“They had real nice side profiles. When looking across the ring, they were level straight. I hope they sell good for the kids.”

For Kara, hearing her name called as reserve champion brought shock and relief, as well as a few tears that had to be wiped away on her flower-embroidered pink shirt.

“I really couldn’t believe it,” said the 12-year-old daughter of Jeff and Debbie Saunders. “I didn’t know that I would do that well. I didn’t know before the show at all.”

It was a bit of a surprise to mom and dad, too.

“We have always been sheep people.” Jeff said with a laugh. “Her two sisters all showed lambs. Her mother and I showed lambs. She got grand, grand and reserve with lambs but wanted to go with pigs this year. So we are really happy.”

So, why the change?

“Pigs have personality. I like to work with them,” Kara said. “They know what they are doing. At least they act like it.”

With temperatures dipping into the low 80s and cool breeze from the four giant fans spinning overhead, the bleachers of the new arena were packed with friends and family who were as excited as the youth showing the animals.

For Hunter, this is what the fair is all about.

“It is great to be able to win but also just to make friends here.”

The 9th Annual Tools 4 School Giveaway and Summerfest is scheduled for Saturday, Aug. 3, at Sixth and Center streets... read more