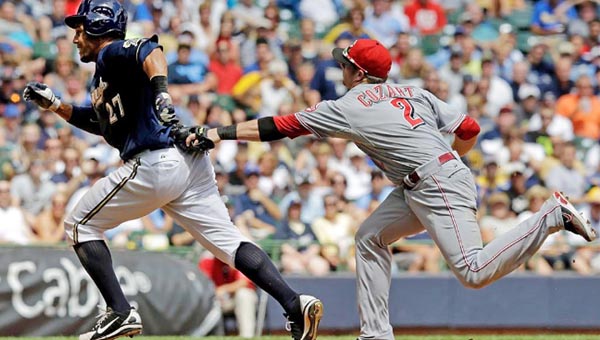 MILWAUKEE (AP) — With the Cincinnati Reds reeling, Mike Leake knew he had to pitch a strong game.

After a shaky start, the right-hander delivered for his team.

Leake scattered four hits over 8 1-3 innings and Brandon Phillips had three RBI, lifting the Reds to a 6-2 win over the Milwaukee Brewers on Wednesday.

Cincinnati put the leadoff runner on base in each of the first seven innings. The Reds snapped a three-game losing streak that had dropped them five games behind St. Louis in the NL Central.

“It would have been a graveyard in here if we didn’t pull this one out,” Leake said.

Leake (8-4) bounced back from a rare rough start in his last outing and seemed to get stronger as the game progressed. He allowed four walks while striking out two.

“It wasn’t the best game I’ve pitched,” he said. “They made me work and they were aggressive towards me. That was one thing that worked to my advantage. I made some pitches when I needed to, to get out of jams. They put some pressure on me.”

Milwaukee starter Johnny Hellweg (0-3) had trouble throwing strikes, was battered for his fourth consecutive appearance and sent back to the minor leagues after the game. The right-hander, who made his major-league debut on June 28, allowed four runs on four hits and five walks in 4 1-3 innings in his third start.

“I think there’s improvement there from the other two starts, but still some things he needs to work on,” Milwaukee manager Ron Roenicke said.

Leake allowed four runs in just five innings during his last start July 5 in a 7-4 loss to Seattle, and gave up a first-inning run to Milwaukee.

“I didn’t think he was going to make it, because they were hitting the ball hard off him,” Reds manager Dusty Manager said.

He then settled down, giving up Sean Halton’s first major-league home run and a walk to Jeff Bianchi in the fifth.

“I thought I had a hundred pitches because I had walked four guys,” Leake said.

Leake then retired the next 13 batters.

“I just kind of attacked them and mixed it up a little bit more,” he said.

Jonathan Lucroy reached on a one-out single in the ninth against Leake, and Baker turned to closer Aroldis Chapman to finish the game in a non-save situation.

Shin-Soo Choo had two singles, a double and a walk. Phillips had two hits and drove in runs in the first, third and seventh innings.

Jay Bruce went 2-for-4 with a walk, driving in a run in the fifth and seventh innings.

The Reds could have scored more runs, but were 3-for-14 with runners in scoring position.

“We have to cash in on a couple of those opportunities,” Baker said. “I know it sounds greedy right now, but we want all the runs we can get. You try not to keep them in the game.”

Acquired in the 2012 trade that sent Zack Greinke to the Los Angeles Angels, Hellweg has struggled in three starts and one relief appearance. In 10 2-3 innings, he has given up 20 runs on 19 hits and 12 walks while striking out three batters.

He was optioned to Class A Wisconsin in the Midwest League after the game to keep him pitching every fifth day, Roenicke said. Other Brewers affiliates have off days that would have gotten Hellweg off schedule, Roenicke said.

The Reds made it 1-0 in the first on Choo’s leadoff double and a two-out single by Phillips.

Milwaukee tied it in the bottom of the inning on a sacrifice fly by Carlos Gomez.

Cincinnati got a sacrifice fly from Devin Mesoraco in the second and added another run in the third when Zack Cozart scored from third on Phillips’ groundout. Cozart scored again to make it 4-1 in the fifth on a groundout by Bruce.

Halton’s made it 4-2 in the bottom of the fifth.

Cincinnati scored twice in the seventh off Hand to make it 6-2 on RBI singles from Phillips and Bruce.

Notes: Brewers OFs Ryan Braun (sore left thumb) and Norichika Aoki (left elbow tightness) were out of the lineup. They are expected to start Thursday at Arizona. … Reds LHP Sean Marshall, on the DL with shoulder soreness, threw a 42-pitch bullpen session Tuesday and said he felt no soreness on Wednesday. He said there is no timetable to begin a minor-league rehab assignment. … Reds OF Chris Heisey was wearing a compression sleeve on his left arm Wednesday after being hit by a fastball from RHP Wily Peralta on Tuesday night. He was out of the Reds lineup.