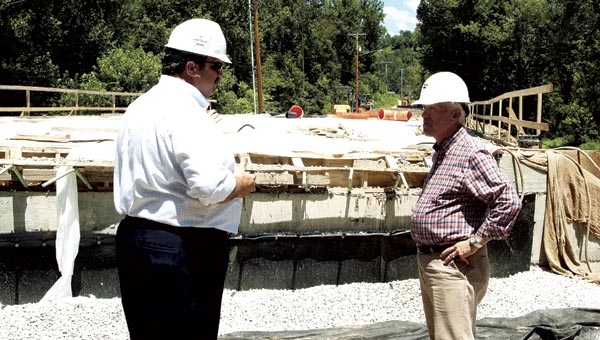 The two met at the construction site on County Road 22 Bridge, a $1.3 million replacement project funded through the Federal Highway Program Local Bridge Replacement Program at 80 percent of the total construction cost.

Earlier in the day Johnson met with community leaders at the KYOVA Interstate Planning Commission.

With the bridge construction site as a backdrop, Cade presented what he called his challenges to getting funding for county projects and using limited funding most efficiently.

“The federal highway program ODOT (Ohio Department of Transportation) administers it and there is so much red tape,” Cade said.

The County Road 22 project to raise the bridge and roadway to alleviate flooding was begun in 2005, but actual construction started this June. For it the county received a federal grant of $705,440 that only could be used for construction. Design costs were the county’s responsibility.

ODOT took a year to review the project and when the project went out to bid it came in over the estimate so it had to be rebid in the fall of 2012.

“It took eight years to build that,” Cade said. “Their priorities are their projects.”

For the bridge project ODOT is charging the county up to $125,000 to inspect the work. However, Cade said the county could do the work in-house at under $40,000.

Also a strip of land at the site was privately owned and had to be purchased by the county. The county engineer’s office had to spend $8,300 for a real estate appraisal and other real estate requirements including a title search for the parcel that the appraiser said was worth $600.

“I couldn’t negotiate directly with that property owner,” Cade said.

“ODOT wanted me to take him to court,” Cade said.

There are 42 bridges that are posted for restricted weight limits with only 18 of them eligible for federal funds.

“(The remaining) are our responsibility,” he said. “We have to figure out how to do it. That is a huge challenge.”

Another problem the county faces is coming up with the local match for federally funded projects such as the landslide and bridge repair projects following the torrential rains in May 2011. That storm left the county with 150 landslides and 249 damaged bridges.

Federal Emergency Management Agency funds covered 75 percent of the costs. However, the county had to come up with its 25 percent upfront. The state reimbursed the county 12.5 percent after the projects were completed.

“How are we going to come up with our match,” Cade asked. “We don’t get reimburse until the end. We borrowed $3 million.”

Johnson said while it is a good thing that funding pork barrel projects is no longer the norm, funds must be found for those roadway projects that are vital to the welfare of a community.

A call made to Kathleen Fuller, District 9 public information officer for ODOT, was not returned by press time.

At his meeting with Rep. Bill Johnson (R-6) on Monday, Lawrence County Engineer Doug Cade presented the congressman with a... read more