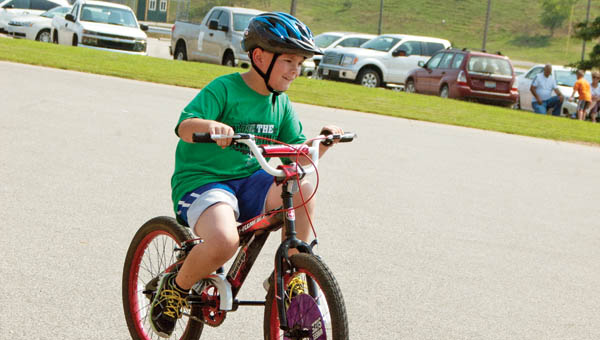 Jacob Edmonds, 8, pedals on his own.

HUNTINGTON, W.Va. — Before she could even utter a word, tears began welling up in Nancy McCoy’s eyes.

Just the thought of her son, Joseph Luke, riding a bicycle on his own was enough to overwhelm the woman.

Luke, 17, has microcephaly, a condition in which a person’s head is significantly smaller than normal for his or her age. When he was 8 years old, Luke suffered from 80 to 100 seizures a day, McCoy said.

A surgery, called corpus callosotomy, corrected the seizures but left him in a vegetative state.

“He had to re-learn everything,” McCoy said.

Luke went from a rehab center, to being wheelchair-bound, to playing sports and competing in Special Olympics events.

Bike riding, a typical rite of passage for many children, still seemed to elude Luke.

“He has a bike,” McCoy said. “He just walks it around the yard.”

Luke couldn’t pedal, steer and balance all at the same time.

It was an advertisement for a week-long summer camp that changed everything.

The teen’s respite worker saw an ad for Lose the Training Wheels, a program that teaches children with disabilities to ride bikes.

On Monday, McCoy drove about two hours from Naoma, W.Va., to Huntington so her son could attend the camp, hosted by Marshall University’s School of Kinesiology at Huntington High School.

The camp starts children on adapted bikes, called roller bikes. Like a training wheel, each bike has a roller on the back that keeps it stable, eliminating wobbling. Through the week, the rollers are changed, tapering at each level, teaching the body how to balance. When the last in a series of eight rollers is removed, the child is left riding a two-wheeled bike on his or her own.

This is the third year for Lose the Training Wheels and Dr. Gregg Twietmeyer, assistant professor of kinesiology at Marshall, said riding a bike is usually a child’s first step towards independence and freedom.

For children will disabilities, about 80 percent would never learn to ride a bike.

“With the program, the number inverts, and 80 percent do learn,” Twietmeyer said of the camp.

McCoy admitted she thought her son could be in the 20 percent of campers who wouldn’t get the hang of riding a bike. But Friday, as Luke sailed around the high school’s parking lot on his own bike —with no training wheels or an adapted bike — McCoy beamed.

“In three days he learned to ride a two-wheeled bike,” McCoy said. “I think I cried enough for everybody.”

Another biker who overcame the odds was 7-year-old Isabella Deller of Huntington.

After about a month of trying different medications, surgery to detach the left hemisphere of her brain was the only option left.

When the little girl awoke from surgery, she was completely paralyzed. She couldn’t speak. The right half of vision in both eyes was gone.

But thanks to rigorous therapy — occupational, physical, speech — Isabella has improved by leaps and bounds. She starts first grade this year.

Another milestone, she is learning to ride a bike without training wheels.

“She could ride with training wheels, but once you take them off, she would fall off,” Deller said.

On Friday, on the last day of Lose the Training Wheels, Isabella was peddling on her own. Still a bit wobbly on her right side, Isabella had a volunteer run along side her, ready to grab the modified handle on the back of the bike if need be.

“Her doctors can’t explain a lot of what she does,” Deller said of his daughter’s progress.

The man said he is looking forward to the day when he and his daughter can go on a ride together.

“I ride a lot. That’s one of the things she always wanted to do, is ride with me,” Deller said. “One day soon we’ll be able to go on a bike ride.”

This year, about 23 children with varying disabilities — autism, Down syndrome, sensory processing disorder and others — signed up for the program.

Alicia Marietta of South Point, signed up her daughter, 8-year-old Anneliese, to the program.

She found out about the program late Sunday night and called Twietmeyer to see if she could still register.

“Gregg called me at a quarter to 10 and got her in,” Marietta said.

But Monday, Anneliese wouldn’t even get on the bike, Marietta said. The girl couldn’t find her balance, and it frustrated her. Still, Anneliese stuck with it.

By the last day of the camp, the girl was riding on her own.

“To see her ride without any training wheels, no adapted bike, I don’t know how to describe it,” Marietta said.

Twietmeyer said he hopes to see the program continue to grow because it gives the children self-esteem and confidence.

“We just want to help more kids,” he said. “Why not help as many as possible?”