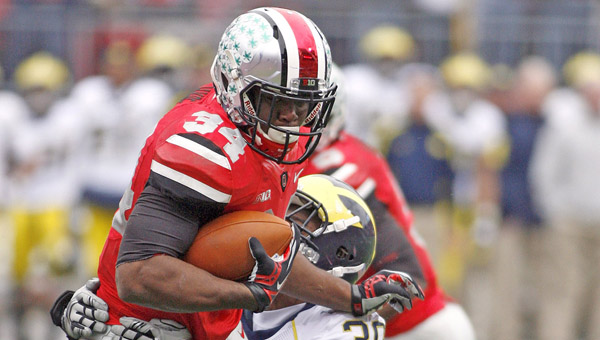 Ohio State’s Carlos Hyde (34) is shown trying to break free from Michigan’s Thomas Gordon (30) during the second half of a game last season. Hyde — the team’s leading scorer last season — is one of four Buckeye players who were disciplined by head coach Urban Meyer for off the field legal issues. (MCT Direct Photo)

COLUMBUS (AP) — Ohio State coach Urban Meyer has disciplined four players for legal problems, including suspending leading-scorer Carlos Hyde from all team activities in the wake of an alleged assault against a female over the weekend in Columbus.

In addition, star cornerback Bradley Roby, who was arrested in Indiana for an altercation with a security guard at a bar this past weekend, will not represent the Buckeyes at this week’s Big Ten media days. He was one of the players initially selected to speak to reporters at the annual event.

“I have a clear set of core values in place that members of this football program are constantly reminded of and are expected to honor,” Meyer said in a statement issued by Ohio State late on Monday afternoon. “There are also expectations with regard to behavior. I expect our players to conduct themselves responsibly and appropriately and they will be held accountable for their actions.”

There were published reports earlier in the day that Hyde had been kicked off the team for being listed as a person of interest in the alleged assault of a woman at a downtown Columbus bar. The Columbus Dispatch cited sources saying Hyde was dismissed from the team over the incident early Saturday.

Hyde, a 6-foot, 242-pound senior from Naples, Fla., rushed for 970 yards on 185 carries last season, second best on the team behind quarterback Braxton Miller, and was the unbeaten Buckeyes’ leading scorer with 17 touchdowns and 102 points.

He came within just 30 yards of becoming the first running back to reach 1,000 yards in a season in Meyer’s 12 years as a head coach at Bowling Green, Utah, Florida and his lone year at Ohio State.

Roby, one of the team’s top returning defensive players, was involved in a separate incident.

Roby, a 5-11, 192-pound redshirt junior from Suwanee, Ga., was Ohio State’s third-leading tackler last year. He had two interceptions, one for a touchdown, to go with two tackles for minus yardage, one sack, one fumble recovery and one blocked kick.

He had considered jumping into the NFL draft after Ohio State’s 12-0 season but decided to return to the team.

Pending further investigations of Roby’s actions, he could receive more punishment from Meyer.

The Bloomington police report charged that Roby tried to start a fight with one patron of the bar and was forced out of the bar. Hoping to get back inside with his friends, he attempted to re-enter the bar and was told he could not. The report states, “Mr. Roby then struck one of the security guards in the chest, causing a complaint of pain. He was then wrestled to the ground and detained until police arrived at the scene.”

Baugh, like Hyde, was removed from all team activities and will also sit out the first game of the season, Aug. 31 vs. Buffalo, for his arrest last weekend for underage possession of alcohol and possessing a fake identification. The Riverside, Calif., native’s actions will also result in the loss of his financial aid this summer.

Gardner, from Indianapolis, was sent home and will not be a part of the 2013 team after he was charged Saturday night by Columbus police with obstruction of official business.

It was not immediately known if he was linked to Hyde’s arrest or that was yet another incident.

“Swift, effective and fair discipline is the standard for our entire athletics program,” Smith said in the statement. “I applaud Coach Meyer for his immediate actions.”

Meyer has faced questions in recent months after the arrest of one of his former players at the University of Florida, former New England Patriots tight end Aaron Hernandez, was arrested on murder charges.