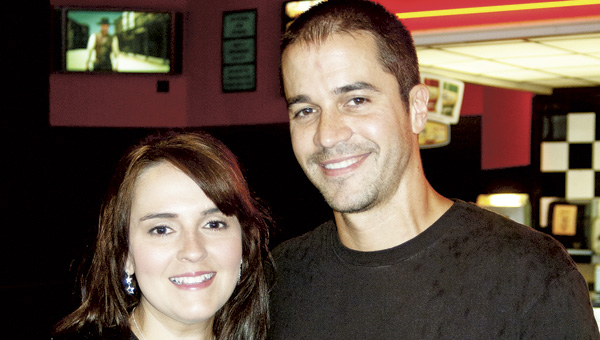 Jerri and Kevin Compton have seen Bruce Springsteen in concert 40 times over 20 years. Concert footage they shot was featured in a new documentarty called “Springsteen and I,” which premered Monday in Ashland, Ky., and select cities.

ASHLAND, Ky. — When it was all over, the black screen with scrolling white text showed many names, but only one of which the crowd in the Ashland, Ky., theater came to see.

Kevin Compton was one of fewer than 100 people who had their personal stories or footage featured in a new documentary, “Springsteen and I,” produced by Ridley Scott.

When Compton’s name scrolled up the screen in the Movies 10 cinema, shouts went up and clapping sounded from the theater, all in support of the Ashland man’s contribution to a film made entirely of fan submissions.

More than 2,000 clips were submitted for the documentary, which aimed to show the relationship between Springsteen fans and the musician famously known as The Boss.

“I thought it was great. I thought it was fun,” Compton said. “Made by fans for fans. To get my name in the credits of a Ridley Scott film about Bruce Springsteen, I can’t complain about that at all.”

Compton and his wife Jerri heard about the call to submit concert footage and personal anecdotes about the rocker through fan message boards and music publications this past summer and decided to participate.

As is the same for thousands of other fans, Kevin and Jerri Compton’s love for Bruce Springsteen grew out of a single concert experience and led to a decades-long pilgrimage to follow the Jersey-born rocker all over the country.

The couple can tell story after story about any of their 40 times seeing the iconic musician, so naturally, there were plenty of moments to choose from.

The Comptons submitted three five-minute videos. One of which was about Compton’s introduction to the musician when he was just a young teen, growing up in Logan, W.Va.

“Growing up I wasn’t allowed to listen to rock or pop music,” Compton said. “I would sneak and do it, as any kid does when they are not allowed to have something.”

It was a report by Pat Robertson on the 700 Club about the song “Born in the U.S.A.” that convinced Compton’s conservative parents that maybe the rocker was suitable for their child to listen to.

Although the anthem wasn’t really a patriotic song, rather about the effects of the Vietnam War on Americans, Compton’s parents relented.

“I saw an opportunity to maybe get an artist I liked approved. And it worked,” he said. “After that they kind of relented. That album led to other Bruce albums. It was kind of my gateway into everything else.”

Meanwhile, Jerri Compton grew up listening to rock and roll music with her parents.

“Rock music was just part of our family,” she said. “Springsteen was just another artist. I just liked him. Can remember hearing him when I was 6 or 7 years old.”

It wasn’t until the two began dating that Jerri grew in her appreciation for Springsteen.

“Kevin used to make me mixed tapes and he would always put Bruce songs on there. And ‘The River’ was the song I heard that just put me over the edge of going, yeah, this is good stuff. This is really good music. After that I just started to absorb as much as he had.”

Another video submission told the story of the couple’s relationship with each other and how Springsteen played a role in their lives, right down to the rocker’s songs played at their wedding.

A third video, and Compton’s shining Springsteen moments, details how the couple met the man in Detroit, Mich., on Compton’s 40th birthday in April 2012. The couple had traveled to see Springsteen in concert and afterwards waited for a chance to get an autograph — something Compton had strived for for 20 years.

“There are pictures of me throughout the years with my “Born to Run” album, so you can watch me age,” he said. “’Here is Kevin in New Jersey waiting backstage for Bruce. Here is Kevin in Cincinnati and there is Bruce’s van driving by Kevin.’ For 20 years.”

Finally the moment had arrived.

“It was luck,” he said. “Five minutes after midnight on my 40th birthday he came out the back door and it finally happened.”

The Boss was signing autographs, getting ever closer to the Comptons. That was when a group of young girls exclaiming something about an 18th birthday sent Bruce in the other direction.

Not one to usually stand out from the crowd, Compton took action.

“‘Bruce, I wish I could say I was 18 but unfortunately, I’m 40 today,’” Compton said. “And he heard it. And it apparently cracked him up enough. …Once he was done with them he came over to me.”

The Comptons were notified in May that some of their footage was used for the film, which is the reason Ashland and Huntington, W.Va., were chosen as two of the several hundred cities to preview the release of the documentary. The couple didn’t know what or how much was used, but they did catch a glimpse in the theatrical trailer released online.

In the end, none of the Comptons personal stories made it past the cutting room floor, but what did make the film was some concert footage shot by Compton at the KFC Yum Center in Louisville from last year.

Despite the lack of face-time in the film, the Comptons said they loved the fan film.

“I thought it was great,” Jerri said. “It was funny, sad, touching. Maybe we’ll make the sequel.”

As an added bonus, the manager of the cinema sent the couple home with a parting gift — the giant movie poster that had hung in the lobby.

“We might have to hang this in the living room,” Jerri said.