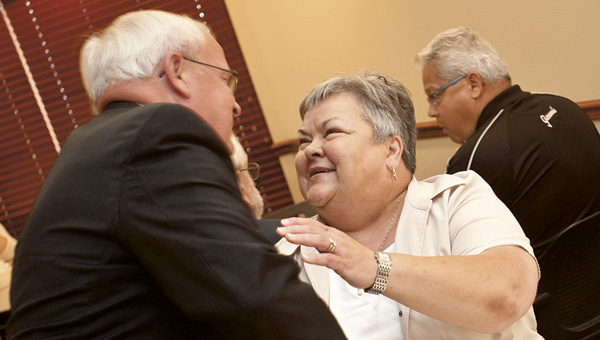 Dianne Clement, a community supporter and longtime volunteer with dozens of local organizations, is given a goodbye hug by Dan Mooney. After more than four decades, Clement and her husband, Gene, are moving to Texas to be closer to family.

SOUTH POINT — If not you, then who?

Never one to sit on the sidelines and wait for someone else to take action, Dianne Clement lived that mantra.

From her more than four decades of employment at Marathon Petroleum Company, to her numerous charitable organization volunteer efforts, Clement has been a non-stop advocate for the Tri-State.

Friends, colleagues and fellow volunteers said goodbye Tuesday to the woman whose shoes they say will be difficult to fill at a special reception at the Greater Lawrence County Chamber of Commerce. Clement and her husband, Gene, are moving to Texas to be close to a son and his family.

“Whatever it took, she went the extra mile,” Dr. Bill Dingus, executive director of the chamber, said of Clement. “You’re the role model of what makes a community great.”

Echoing that sentiment, Dave Milem, local historian, praised Clement for her work with various historical projects around the county and presented her with a silver medallion.

“I think everybody in this room has benefited by Dianne’s work,” Milem said. “I know I have and I appreciate it.”

In addition to working alongside Milem on historical projects, Clement was a member of various boards including the chamber and the Lawrence Economic Development Corporation, Friends of Ironton, Paramount Arts Center, Big Brothers Big Sisters, Rotary, United Way, Foundation for the Tri-State, Leadership Tri-State, Summer Motion, Winter Wonderland of Lights, and many others.

“I don’t know what to say, because I love this area,” Clement said to the crowd. “I love the people. It’s home. It will always be home. There is just no place like it. I appreciate you all more than you will ever know. The comradery. The fun we had planning the first Macker.”

Clement left behind some words of wisdom for young people curious about getting involved in the community.

“I always encourage young people to find their niche in community involvement,” Clement said. “Not just to get their names on boards and committees, but to actually be a working member of that board or committee. They need to believe in whatever organization they join.”

Clement said leaving the Tri-State behind is bittersweet, but that she is looking forward to a new chapter in her life.

“You fill up the pages of one chapter, and you think, ‘OK, where do we go from here?’”

IRONTON — There are people who are struggling from day to day to find where their next meal will come... read more