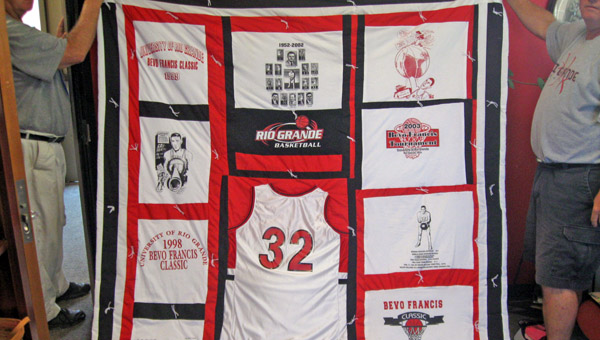 RIO GRANDE — Given his long-time involvement with athletics, the manner in which Melvin Carter has spent his free time for much of the past 10 years may come as a surprise to some.

The former athlete, coach, administrator and high school athletic official has become quite accomplished over the course of the past decade with a sewing machine.

Carter, who resides in Thurman just a few miles west of the University of Rio Grande campus, found himself spending time alone while his wife, Wilmena or “Willy” as she’s known by many in the local area, was caring for her then-ailing mother on alternate days for a span of seven years.

“I pulled out the sewing machine. Mom taught us to use it when we were young. I got it out, put couple of pieces of cloth together and thought man this is fun,” said Carter, who spent 30 years as a coach between the now-defunct Southwestern and North Gallia high schools and 42 years as a three-sport official for the Ohio High School Athletic Association.

“Plus, it was time-consuming. I started with a 9-patch and did my own designs. I had all those hours to fill and that’s how I got started.”

His wife helped to fuel the fire.

“I’d tell my friends about his quilting and they’d pick up materials at a yard sale and bring it back to us,” Willy Carter said.

And slowly, but surely, word began to spread about Carter’s work.

“I had a lady who wanted me to make two baby quilts, which I did. She had three Amish women with her when I showed them to her and they said that I did a pretty good job for a man,” Carter said with a smile. “It wasn’t a hobby, necessarily, at first. It was just something to pass the time away. It turned into a hobby.”

Carter, who owned and operated a grocery store in Thurman with his wife for 30 years, considered his work as “quilting” and referred to it as such – until he was corrected by a short time later by a veteran user of the needle and thread.

“Apparently, there’s a difference in what I do and quilting,” he said. “We were at a church meeting one time and this elderly lady sat across from me and said, ‘I hear that you sew.’ I told her yes, that I really enjoyed it and that I made quilts. She said, ‘Do you quilt them or knot them?’ and I said that I knot them. She told me, ‘You don’t quilt, you make comforters.’ ”

Call them what you want, but some 120-plus pieces later, the father of three, grandfather of 10 and great-grandfather of four is still going strong.

The majority of the comforters that Carter and his wife have created have been donated to local groups for their fundraising efforts.

“We’re not looking to get famous or to receive a lot of credit for it. We just do it, whether it be for churches, schools, or just to benefit people who need it,” he said. “We did one a while back for a food pantry that brought in $600.”

Carter said that, while he and his wife may have an idea about the kind of piece they’re intending to do, sometimes the finished product is a completely different thing.

“I let Willy coordinate the colors first of all. If it’s a nine-patch, I cut out the squares, strip them and put them together. Willy binds all four sides by hand,” he said.

“A lot of times, we start something and then veer off and do something completely different. I have some books that show different patterns and there are people who will bring me patterns to look at. We try not to use whole pieces. I like to cut them out and then put them back together. I like to make what they call scrap-happy or crazy quilts. Every one is different.”

Among Carter’s body of work are baby quilts and comforters with sports themes, houses, dutch girls and bird houses to name a few.

He’s also made his own tote bag by cutting the legs off of an old pair of football pants, sewing the bottoms up and attaching straps. He’s also made scarves out of old t-shirts.

Carter readily admits that his favorite piece isn’t even one he produced.

“My favorite is a Yo-Yo quilt that Willy made,” he said.

The piece was well-received by Francis, who continues to battle health issues, and his long-time wife, Jean.

It is among those currently on display daily, through July 31, as part of the Celebrate Quilts! show at the Bob Evans Farm Event Barn.

“Bevo is my friend. I’ve known him for a long time,” Carter said. “I just wanted to make him one. I didn’t do it for glory or for public opinion of me.”

That’s what makes his desire to do something long-considered a chore or a hobby of the female persausion so special.

“Everybody has a hard time believing he makes quilts,” Willy Carter said. “He was always the roughy-toughy type.”

And just how long does the man with the big hands and an even bigger smile intend on working behind the sewing machine?

“As long as we can thread the needle,” he said.