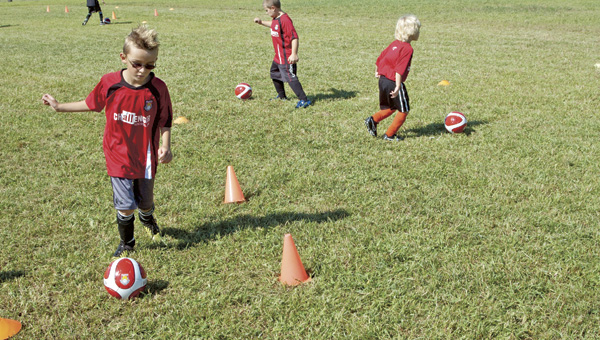 PROCTORVILLE — Ten-year-old Clayton Bloss of Proctorville prodded the white and black soccer ball with the toe of his boot through a maze of orange cones to see how fast he could do the exercise.

In soccer parlance that’s called dribbling and Carter was joining want-to-be -soccer players and those with some experience in the game at the annual summer camp put on by Challenger Sports, the largest soccer camp organizer in North America.

Coaches for the weeklong camp on the grounds of Ohio University Southern Proctorville Center knew what they were talking about. All hailed from the British Isles playing the game from the time they were 3 or 4 years old.

For several years the sport has gained a following in Lawrence County with the creation of the Eastern Lawrence Youth Soccer Association.

“It’s a sport that is outside and instead of using your hands, you use you feet,” Clayton said.

Monday morning’s session focused on teaching the young students how to control and maneuver the ball.

“This gets the kids used to the ball and how to go into different directions,” Ryan McLeod, a Challenger Sports coach, said. “You let them figure it out for themselves.”

As the week progresses the students will be introduced to more complex concepts of the game but for the first session coaches worked on what McLeod called the “easy stuff.”

McLeod who learned the game at his home in Glasgow, sees playing soccer as a metaphor for life.

“It teaches discipline and how to work hard even when the odds are against you,” he said. “I think in all sports you learn a lot of life skills.”