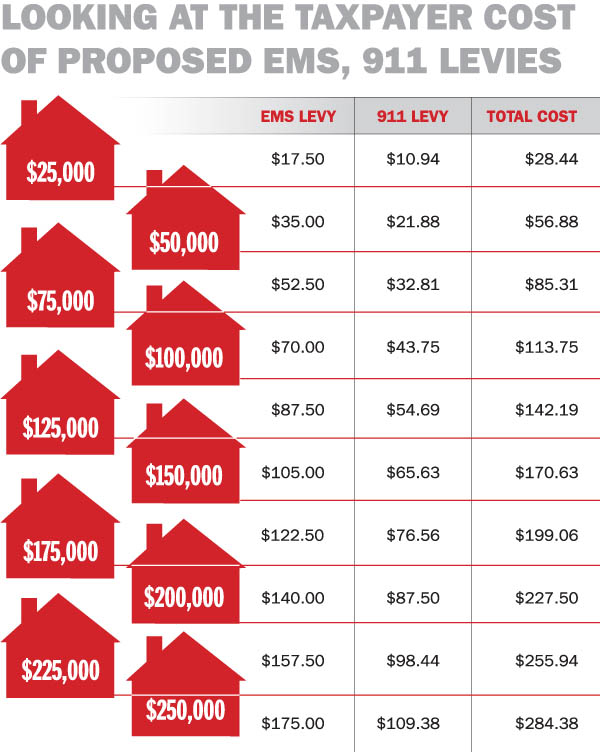 At year’s end the dispatching service will be $45,649 in the hole, if no more appropriations are made.

If projections hold, by Christmas two of Lawrence County’s emergency services will be almost a quarter of a million dollars in the red. Now, county leaders and those in charge of 911 dispatching and the EMS are wondering if taxpayers are willing to play Santa Claus come November.

At year’s end the dispatching service will be $45,649 in the hole, if no more appropriations are made.

Already there is an almost $8,000 deficit in its insurance account and only enough money to fund two more pay periods. By Aug. 16 money will be depleted in the salary account.

Likewise, as the numbers stand today, the EMS will face an almost $200,000 deficit by year’s end without more money.

“We call 911, we expect someone to answer the phone,” Commissioner President Bill Pratt said. “We want the EMS to be there. We need to look forward to see what kind of community people want to have.” 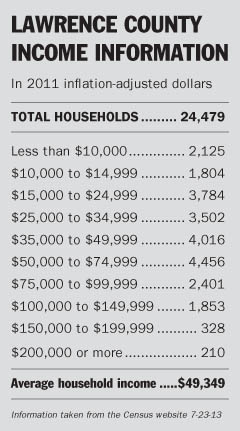 How that funding stream is created may be determined on Thursday when the Lawrence County Commissioners decide if they want to put two tax levies on November’s ballot.

“These are important services,” County Auditor Jason Stephens told the commission at its Tuesday work session, when he presented the numbers for the possible levies. “The time is coming when the state is not going to fund a dime for the counties, in my opinion.”

As an alternative solution, Stephens presented the Lawrence County Public Safety Funding Plan that came about following discussions with Buddy Fry, Lawrence County EMS director, and Lawrence County Sheriff Jeff Lawless. It shows how two separate levies — a 2 mill for the EMS and 1.25 mill for 911 — would augment the budgets of those services and free up money in the 1/2 sales tax for the other emergency services.

“Over the summer we have been discussing with the EMS and the sheriff the numbers in the budget to have to fund public safety in the future,” Stephens said. “Through that exercise, we were trying to figure out what would be plausible solutions. One of the topics that came up would be levies to fund the EMS and 911.”

“It would change the scope of the county budget for the next decade,” Stephens said. “If it doesn’t get on the ballot or doesn’t pass, same song different verse when it comes to the budget.”

Right now Lawless and Fry see the levies as providing a viable revenue source for their agencies, although they acknowledge the negative cachet to more taxes.

“No one wants to be taxed. I understand that,” Lawless said. “But if people want to stay as safe as they can, it unfortunately costs money to keep people safe.”

For Fry, getting an amount of money he can count on would make his job easier.

“From this seat, being a manager here, I would like to see a stable, known amount of funding each year for planning, capital improvements,” he said. “The commission decides how they want to fund us. A levy would give us a known amount each year. We wouldn’t have to wait for November to see what we would get for the next year. A good solid five-year plan or a 10-year plan, that is hard to do when you don’t know what funding would be for the next year.”

But whatever the monetary gain for the two services from the levies, they mean a cost to the property owners since the levies would target their homes. Starting with a property valued at $25,000 to one 10 times, that the total cost to the taxpayer would range from $28.44 to 284.38.

Lawrence County has the lowest tax rate in Ohio.

If Lawrence County voters pass both levies, the county’s tax rate of 43.46 would be fourth lowest in the state. The three counties with lower rates all combine to have less than Lawrence’s population.

While the commission in 1998 could institute the 1/2 percent sales tax without voter approval since it was an emergency measure, that would not be the case with these levies.

It would be up to the voters. However, the commissioners can put the issue on the ballot with a simple majority.

Right now, commission is split with Pratt in favor of letting the voters’ decide and Commissioner Freddie Hayes opposed. Commissioner Les Boggs has not made a public statement and was not available for comment by press time.

“I am totally against it,” said Hayes last week. “I don’t believe we need to put any more taxes on the people. They are already paying enough. People are struggling to put food on the table and medicine. I think (the services) will be able to live with what we give them. Everybody has to tighten their belts. (They are) not that not much far in the hole, maybe make a few adjustments. There is no need for another tax. It is just getting out of hand.”

Pratt, on the other hand, has said on several occasions the levies should be decided upon by the voters.

I think it is important to give the voters a choice,” he said. “That doesn’t mean I am in favor of property tax levies. But we are going to have to decide what kind of community we are going to have, to rely on less and less on the state level. If it is something (the voters) want to pursue, it puts us in a great position.”

Giving first-time low-level offenders a second chance and an opportunity to better themselves. That is the goal of a program... read more