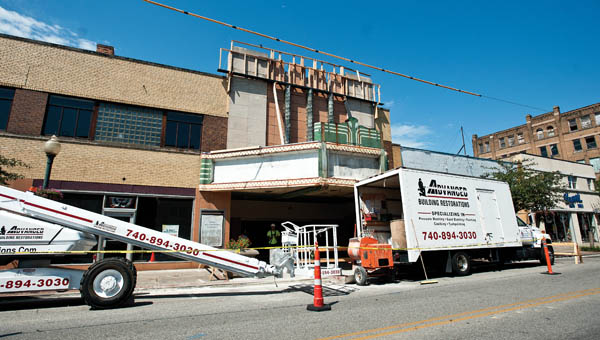 What used to resemble an electric tiara displaying the names of great movie stars now only displays decades of rust and weathering.

The cache of tiny bulbs and neon lighting has long since burnt out on the aging Ro-Na Theater’s marquee on South Third Street in Ironton.

Three glass block columns hovering over the art deco-style theater are cracked and broken, the parapet stressed and leaning.

But only for a little while longer.

For weeks, Advanced Building Restorations of South Point has been working to repair the parapet and marquee, all a part of the ongoing Ro-Na restoration project by the Friends of Ironton.

Griffith said the work is scheduled to be completed by the end of this week.

The first film shown at the Ro-Na Theater was “Once More My Darling,” starring Robert Montgomery and Ann Blyth. The theater opened Aug. 10, 1949. A newspaper advertisement boasted state-of-the-art amenities for its patrons including zone controlled air conditioning “assuring the patrons of the Ro-Na healthfully cooled comfort, RCA sound and projection equipment, which reproduced life-like sound and unparalleled steady picture.”

There were American Bodiform seats designed for “restful comfort with ample space between rows” and a “beautiful powder room for comfort and convenience.”

The theater operated until the 1970s. It was later used as an auto parts store.

A work in progress

When it comes to restoring the 64-year-old theater, it has been baby steps, but progress is being made.

The Ironton City Council took possession of the old theater in 2008 and a fundraising campaign began to raise money to repair the leaking roof.

Ralph Kline, assistant executive director over development and planning for the Ironton-Lawrence County Community Action Organization, has helped with the restoration process since the early stages and can remember its disrepair.

“It was a near loss,” Kline said. “When you went in and looked up, you could see the sky.”

By September 2009, a roof and decking plan was approved and the city went forward with the project. Originally seeking about $200,000 in donations, the city only received about $58,000 in pledges and donations. The city funded the rest at about $129,000.

In July 2011, the theater got a Ohio Department of Development Historic Preservation Tax Credit of $1,581,887. Eventually the building was transferred to the Old Engineers, LLC, a for-profit entity comprised of the Ironton Port Authority, Lawrence County Port Authority, CAO and the Lawrence Economic Development Corporation.

A few months ago, Griffith said, Old Engineers transferred the Ro-Na to the FOI, who now owns the theater and has been working to turn the theater into a multi-purpose venue.

Where the former Ro-Na Restaurant used to serve steak and chicken dinners, the Friends have installed a long maple bar. The bar top features old movie posters of films that were shown in old theaters.

New drywall has been put up in the bar area, as well as track lighting. The room has air conditioning and heat and the restrooms are nearly ready for water service.

Already, the room has been rented for family and class reunions and birthday parties, Griffith said.

The green room on the Second Street side of the building also has air conditioning and heat and water.

Both the green room and the bar will be open during the Rally on the River.

Other plans for the theater include renovations for the auditorium and doubling the size of the stage. Although not renovated yet, the auditorium has already been used to screen “The Rocky Horror Picture Show,” and for various concerts.

The upstairs walls have been torn down and new office space will be built.

“We need an office space that is ours,” Griffith said. “The Transit Center has been nice for letting us use that area. So as soon as we get ours done here we’ll have an office for Madeline (Blackwell), who is our treasurer. We can store all our records.”

Kline estimated that about a half a million dollars has been spent on renovations, ranging from grant money to donations.

He said the ultimate goal of the renovation process is the transform the theater into a class A indoor multipurpose entertainment facility.

“There is a plan that’s there and the question, I think, that’s out there, is how fast can they reach our final goal?” Kline said. “We will reach it. It’s just, how fast?”