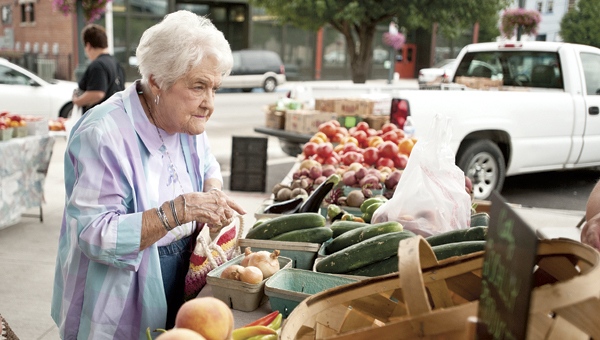 Jean Rowe picks out peaches, onions, tomatoes and peppers during a visit to the Ironton Farmers Market Saturday morning.

Advertising is paying off for this year’s Ironton Farmers Market. Banners, signs and a website have all been used to promote the Friday and Saturday markets that feature locally grown produce.

“We are getting more customers because of the signs,” Tammy Hanshaw of Pedro, said. “Before people didn’t know the Farmers Market was in town.”

This season, the market that opened in June and runs through October, has drawn customers from Kentucky, West Virginia and southern across Ohio.

“We have had people come clear from Portsmouth and past Lucasville,” Hanshaw said.

The market opens at 7 a.m. both days but vendors show up earlier to put up tables and display their baskets of produce.

“It takes me a good hour to set up,” said Hanshaw whose table on Friday featured fresh corn, two kinds of hand-dug potatoes, cucumbers, watermelon, three kinds of tomatoes and plums.

Getting a variety of vendors and produce has also helped draw more customers, according to Becky Wiseman of Pedro, who sells homemade jams and sweet breads along with corn and zucchini.

“You look and there are peaches, plums and baked goods,” she said. “It brings another flavor to the market.”

Saturday is the better day as far as traffic as customers come and go steadily, she said.

“That’s especially true with the vendors who have been here a long time and have their regular customers,” Wiseman said.

Organizers of the market this season wanted to open it up to more than the typical stands of corn and beans and during the spring solicited other vendors including those who do crafts.

Along with a variety of vendors, the market moved to Depot Square under a covered walkway. Previously the vendors set up shop about a block away in a parking lot on South Second Street. That move has also brought in more customers.

“We have been doing way better,” Cathy Knipp of Pedro said. “Before, on Friday’s, we would sit there and do nothing. Now people can find us.”

Anyone wanting to sample some of the kind of wares sold at the Ironton Farmers Market can get a chance... read more