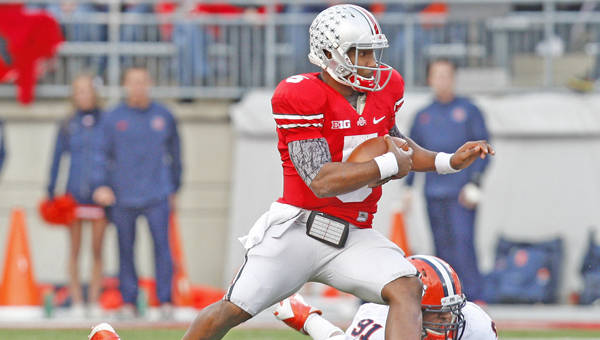 Ohio State quarterback Braxton Miller (5) is one of the key reasons the Buckeyes are heavy favorites to win the Big Ten championship this season. (MCT Direct Photo)

CHICAGO (AP) — By every measure, Urban Meyer’s first season at Ohio State was a smashing success. The Buckeyes won all 12 games, and Braxton Miller developed into a superstar quarterback along the way.

That’s all gone now, practically ancient history in football-mad Columbus. The pressure is on for a blockbuster sequel, even if Meyer himself is preoccupied with the opening scenes.

“Our job is to compete for championships in November. That’s all I want them to think about,” Meyer said. “A team is a complex animal that you got to be really careful how you approach things. Start talking about things that are way beyond even, I don’t want to say expectations, but we don’t talk about those things. We talk about we have to get to November to compete for a championship and that’s complicated enough.”

It sure is. While Miller and Ohio State begin the year as the Big Ten favorite, there are plenty of potential challengers.

Dynamic quarterback Devin Gardner thinks he’s ready to lead Michigan back to the top of the conference. Taylor Martinez wants to put together another great year in his final season at Nebraska. Then there’s Wisconsin, coming off a Rose Bowl trip and looking to make a smooth transition to new coach Gary Andersen, and Michigan State and more.

“I like our football team,” Michigan coach Brady Hoke said. “I usually don’t say that. I said it after the spring. I will continue to say it because I like how they’ve handled themselves on the field and off the field so far this summer. I like their work ethic, and I like how they’ve represented Michigan in a lot of ways.”

Denard Robinson is gone after a stellar career, but Gardner is back to provide the same sort of sizzle in Michigan’s backfield. The 6-foot-4 junior began last season at wide receiver, and then played quarterback for the last five games. He threw for 1,219 yards and 11 touchdowns against five interceptions, and also had 101 yards and seven TDs on the ground.

Gardner is a work in progress — “I have to start to checking the ball down. Always want the big play,” he said — but his teammates have noticed a change in the former Detroit prep star since he became the starter behind center.

“He’s grown right into it,” senior safety Thomas Gordon said. “He’s a lot more comfortable. You can see that.”

While Gardner is the toast of Ann Arbor, he has a ways to go to match the celebrity that Martinez enjoys in Nebraska. The senior star, who accounted for a school-record 3,890 yards of offense and 33 touchdowns last season, spent more than an hour signing autographs during one recent trip to the mall.

Martinez has started 39 consecutive games for the Cornhuskers and will leave the school with several offensive records. While he will go down as one of the best players ever at the powerhouse program, he doesn’t seem too concerned with his legacy headed into his final year.

“I’ve done a lot so far in my career, so I’ve just got to take this season for what it’s worth and just enjoy it and just remember everything that happens,” Martinez said.

Five things to watch in the Big Ten:

1. TOUGH UP FRONT: If you love the big guys up front, check out the offensive linemen of the Big Ten. Senior Jack Mewhort leads an experienced group for Ohio State, and Martinez raves about the unit at Nebraska. Michigan left tackle Taylor Lewan flirted with the NFL draft before deciding to return for one more season. He prepared for his final year by adopting a strict diet that he said helped increase his strength and quickness. “I’ve cheated a couple times, here and there,” Lewan said. “I’m a sucker for ice cream.”

2. DUAL THREATS: Miller, Gardner and Martinez will grab all the headlines, but they aren’t the only Big Ten quarterbacks who can score through the air or on the ground. Northwestern’s Kain Kolter helped the Wildcats to a 10-3 record last season and their first bowl victory since 1949. Illinois’ Nathan Scheelhaase rushed for 303 yards and four touchdowns last year.

3. WHO’S THE NEW GUY: There are two new head coaches this year, with Andersen taking over at Wisconsin and Darrell Hazell going from Kent State to Purdue. The Badgers routed Nebraska in the Big Ten title game on Dec. 1, but Bret Bielema still decided to leave for Arkansas before Wisconsin’s narrow loss to Stanford in the Rose Bowl. Enter Andersen, who left Utah State for quite the unusual transition with the Badgers. “There’s going to be differences when you take over a program,” Andersen said. “It’s important to put your own stamp on it.”

4. SLEEPERS: Pat Fitzgerald has coached Northwestern to five consecutive bowl berths, culminating in the Wildcats’ 34-20 victory over Mississippi State in the Gator Bowl in January. Ohio State, Michigan and Michigan State come to Evanston this year, where Northwestern doesn’t enjoy much of a home-field advantage but could begin to build one with a couple victories. Indiana also could surprise people, with 19 starters back from last year’s 4-8 team.

5. GO DEEP: Penn State star Allen Robinson is the big name, but there are plenty of other solid receivers spread throughout the Big Ten. Kenny Bell (Nebraska), Jared Abbrederis (Wisconsin) and Jeremy Gallon (Michigan) each had over 800 yards receiving last season while averaging at least 16.9 yards per catch. Also keep a close eye on Cody Latimer (Indiana) and Corey Brown (Ohio State).