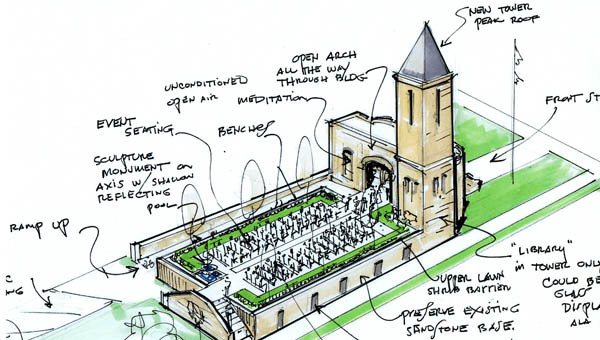 Once the debris is removed, the site will be turned into a pocket park and veterans memorial.

A once-great Ironton landmark is now one step closer to being torn down, but city leaders hope to preserve a large part of it for public use.

At its regular Thursday meeting, the Ironton City Council had third and final reading of an ordinance to demolish Memorial Hall. All seven council members voted in favor.

The 120-year-old monument to the Grand Army of the Republic and former city government building has been a topic of discussion for city and county leaders, and veterans groups, for years, with no group willing or able to fit the bill to restore the decaying structure.

The new ordinance would allow for the advertisement of bids to remove only the brick and debris from the structure, leaving the historic sandstone features, such as the tower. The ordinance limits the cost of the work to no more than $130,000, which will be paid for using bond money from Lawrence County’s Neighborhood Investment Program.

Once the debris is removed, the site will be turned into a pocket park and veterans memorial.

Ralph Kline of the Ironton-Lawrence County Community Action Organization brought a conceptual drawing of what the space could look like.

“When America In Bloom came in about three years ago with the evaluation of the community, one of their key suggestions was to develop more green spaces, pocket parks, within the downtown to make it more amenable to residential and development,” Kline said.

The drawing shows a new roof on the tower and an open archway through the building. What would have been the interior space of Memorial Hall would be an open-air green space with room for seating enclosed by the sandstone base of the building. The lower level windows could be filled in and used as memorial plaques, according to the drawing.

“This picture really brings it to life, all the uses that you could have,” Mayor Rich Blankenship said. “Not only that, but a tourist attraction. I don’t know about you, but I’m tired of looking at it the way it is now.”

“You don’t have to convince me,” Lutz said. “I’ve been on council for six years and my very first meeting I said, ‘You’ve got to do something with this building.’ I say we move on.”

Councilman Aaron Bollinger asked where the money to develop the site into a park would come from.

Kline said the idea of the park would be something that is easily maintained and funding would likely come from donations from foundations and various groups.

Kline also said Ironton In Bloom has agreed to take the lead in helping with the park if council agreed. Members of IIB attended the meeting in support of the project.

Blankenship also asked that any veterans group interested in participating in the project was welcome.

“Any veteran organization in the city or county that would like to be a part of this, contact my office so we can get a list,” he said. “We may not have a list of all the different organizations here in Lawrence County.”

The yard and business judging committees for Ironton In Bloom, Inc. have a busy schedule this month with four unique... read more