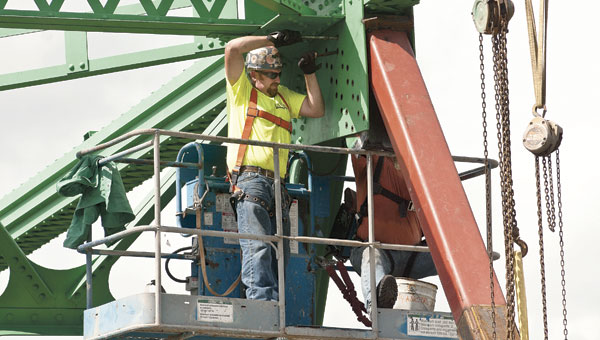 Workers remove rivets from the Ben Williamson Memorial Bridge late Saturday morning as part of the repair work to remove the damaged support beam. (BELOW) Allen Blair, public information officer for the Kentucky Transportation Cabinet, stands next to the red temporary support struts and the new green I-beam that will replace the damaged beam on the bridge.

ASHLAND, Ky. — By Saturday morning, crews were welding the red support struts into the Ben Williamson Memorial Bridge, prepping the expanse for a new I-beam.

Saturday, the light traffic moved smoothly with the help of a Coal Grove Police Officer directing motorists along.

By Saturday evening, crews had replaced the new beam and removed the supporting struts.

The work was no doubt a welcomed sight after a more than two month-long closure to the bridge that carries traffic into Ashland, Ky. The support beam was damaged by a vehicle accident on May 17.

At the time, the Kentucky Transportation Cabinet continued to allow traffic to cross, at a restricted weight limit. A few days later, the bridge was closed as a safety precaution and traffic into Kentucky was routed over the Simeon Willis Bridge, which carries traffic into Ohio.

Allen Blair, information officer for the KYTC, said the process to replace the damaged beam, while seemingly simple, is actually a delicate process.

“You have to tie the top and bottom of the bridge together under normal load conditions,” Blair said.

The temporary red support struts served that purpose. Once they were in place, the damaged beam was removed, while keeping the top and bottom on the bridge under the same force.

If weather permits and everything goes according to plan, the bridge could reopen to traffic by Monday.

Saturday evening, the KYTC sent out a Twitter message saying the bridge could possibly open ahead of schedule.

The work to repair the bridge was originally supposed to be completed by the end of July.

After coordinating schedules and safety plans with both Norfolk Southern railroad and the Kentucky and Ohio transportation departments, this weekend was the contractor’s first available opportunity to make physical repairs on the bridge.

The KYTC awarded the bridge repair work on June 19 to Evers Welding who offered a bid of $52,400 for the job of replacing the damaged beam.

The man who is alleged to have struck the beam, Dennis J. Smith, 59, of South Point, was cited in late June by the Ohio State Highway Patrol.

Smith is charged with failure to control and leaving the scene of an accident, both misdemeanor charges. He pleaded not guilty to the charges July 1 in front of Judge O. Clark Collins.

According to the post, Smith was driving a 1987 Mack semi tractor-trailer loaded with scrap metal at the time of the crash. The truck continued into Kentucky without stopping or reporting that a crash had occurred according to the OSHP. The truck is owned by L.R. Daniels Transportation in Ashland, Ky.

Smith is scheduled for a pretrial hearing Thursday in Collin’s court.

The following highway detour was in effect as of Saturday:

— Ashland-bound traffic will continue using the US 52 exit ramps to access the now two-way 13th Street bridge, so motorists should expect significant delays during construction.

The 12th Street bridge will reopen after the structure is deemed safe to cross by transportation inspectors.

Local leaders get inside look at industrial park

Visitors gather inside the new Orica building as part of a three-business tour at The Point industrial park Friday. SOUTH... read more