Ironton’s Lewis will take ball and run for Marietta 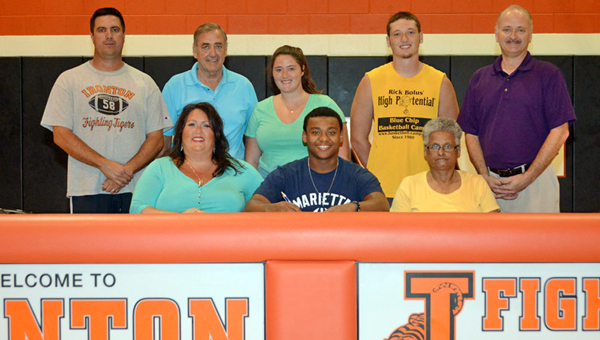 As the Steve Miller Band would say, “Go on, take the money and run.”

Marietta gave Patrick Lewis the money and now he’ll be running for the Tigers football program this fall.

The Ironton Fighting Tigers’ All-Ohio running back signed a letter-of-intent to play for Marietta College. He went with the Tigers’ over other programs such as Urbana, Ohio Dominican, Baldwin-Wallace and Marshall.

“Marietta has a new program and a new coaching staff,” said Lewis. “And I tried to go where they gave me the most money.”

Lewis put up some phenomenal numbers last season. He ran 140 times for 1,175 yards for 10.5 yards per carry. He was the first Ironton starting running back to average 10 or more yards a carry since Terry Royal accomplished the feat back on the unbeaten 1978 team.

He scored 21 touchdowns including a kickoff return and two punt returns.

He was a first team Division IV all-district selection as well as the district’s co-Offensive Player of the Year.

Ironton coach Mark Vass said Lewis had a tremendous year and was a major key to the Fighting Tigers’ 7-4 record and playoff berth.

“Patrick worked extremely hard last year. He was determined to be a better player and he did that,” said Vass.

“He had great speed and could turn the corner and go the distance, but he also had the strength to run through a tackle and break out of the pack and go coast to coast. He was an explosive weapon.”

Lewis said he had a goal to play well last season.

“I worked for it. There were a lot of people out there doubting me,” said Lewis. “I strived for what I did. I’m proud of myself. I made it to the next level. My family and close friends are proud.”

Marietta — an NCAA Division III school — is bringing in between 70 to 80 freshmen, but Lewis is the prize package of the group.

“I hope to have a good first season. They had a good recruiting class. They’re bringing in a lot of freshmen,” said Lewis.

“It’s a blessing. God gave me the opportunity to play again and more importantly to further my education.”

Lewis plans to major in athletic training or sports management.

CINCINNATI (AP) — Xavier Paul and Jack Hannahan were looking for opportunities to redeem themselves after making mistakes that helped... read more